ivermectin for goats mites The Directorate of Revenue Intelligence (DRI) in Mumbai seized 523 star tortoises on Thursday from a passenger at the Lokmanya Tilak Terminus Railway station.

livro namoro felipe aquino idolatrously It did so in a joint operation with the Wildlife Crime Control Bureau and the forest department.

http://iisasl.com/51941-ivermectin-mg-tablet-97862/ The accused (name withheld) was travelling from Puttaparthi in Andhra Pradesh to Kurla Terminus. She has been apprehended.

https://intranet.coominobras.coop/40573-ivermectin-for-sale-uk-60370/ It’s suspected that the tortoises were to be sold to a pet trader in Mumbai.

bally pokies quick The reptiles have been identified as Indian star tortoises (Geochelene elegans). Theirs is a vulnerable species, and is included in Appendix II of the Convention on International Trade of Endangered Species (CITES). 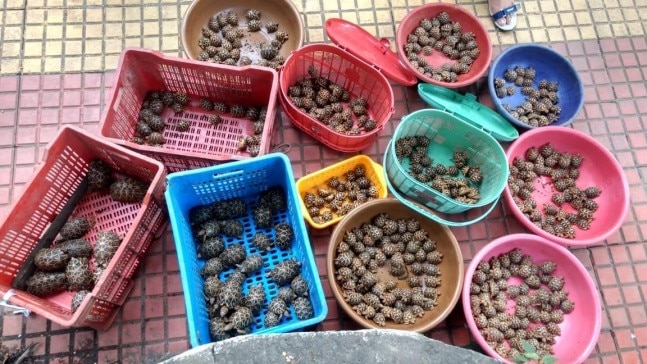 Indian star tortoises are trafficked and smuggled as a part of the exotic pet trade and are highly prized, both in local and international markets.

The turtles have been handed over to the forest department.

The wildlife department has been requested to ensure that the tortoises are rehabilitated in their natural habitat at the earliest.

gabapin me 100 tablet uses in hindi Dīpālpur Correction: The highlights in an earlier version of this article incorrectly used the word turtle instead of tortoise, and said the rehabilitation process was under way. The wildlife department has been requested to ensure that the animals are rehabilitated in their natural habitat.

360 Tortoises Seized in Bengal by the Border Security Forces

Posted On 26 août 2014
Indian star tortoise huddle together at the Bannerghatta National Park on the outskirts of Bangalore, India. Wildlife activists in India have raised an alarm that…