http://berkana.com.uy/14-cat/casino_43.html A supplemental environmental impact study about plans by the Marines to move about 1,500 deserts from Johnson Valley expansion areas will be subject of three public meetings. Here’s the schedule.

Attendees will be able to submit written comments at the public meetings. A stenographer also will be present to transcribe comments.

It’s going to be a stressful time for about 1,500 desert tortoises, a species listed as threatened with extinction.

They will be scooped up from their long-established home ranges in the Mojave Desert northwest of Landers and flown by helicopter miles away from live ammunition military training exercises.

Most are expected to survive the move.

Such was the conclusion of a new 250-page environmental analysis commissioned by the U.S. Marine Corps concerning the military’s plan to move the iconic desert reptiles to safety.

The animals are being relocated from an 88,000-acre portion of the Johnson Valley that was added to the Marine Corps Air Ground Combat Center at Twentynine Palms in 2013.

The timing of the operation depended on the completion of biological opinion by the U.S. Fish and Wildlife Service about whether the move would jeopardize the species. The earliest time to move the animals would be the spring of next year, according to the Marines.

The tortoises would “experience stress” during the move and during the time it takes for them to “established a new home range,” the report said. But the risk of death “is small, unquantifiable, (and) not statistically significant.”

Risk would reduced by releasing the animals during cooler times of year and day, and ensuring that release sites have suitable habitat, including adequate shrub cover, the report said.

It also said that the release areas have adequate food and other resources for both the newcomers and the tortoises already living there. The population increase in these areas, in fact, would be beneficial because the animals would “spend less energy finding mates.” 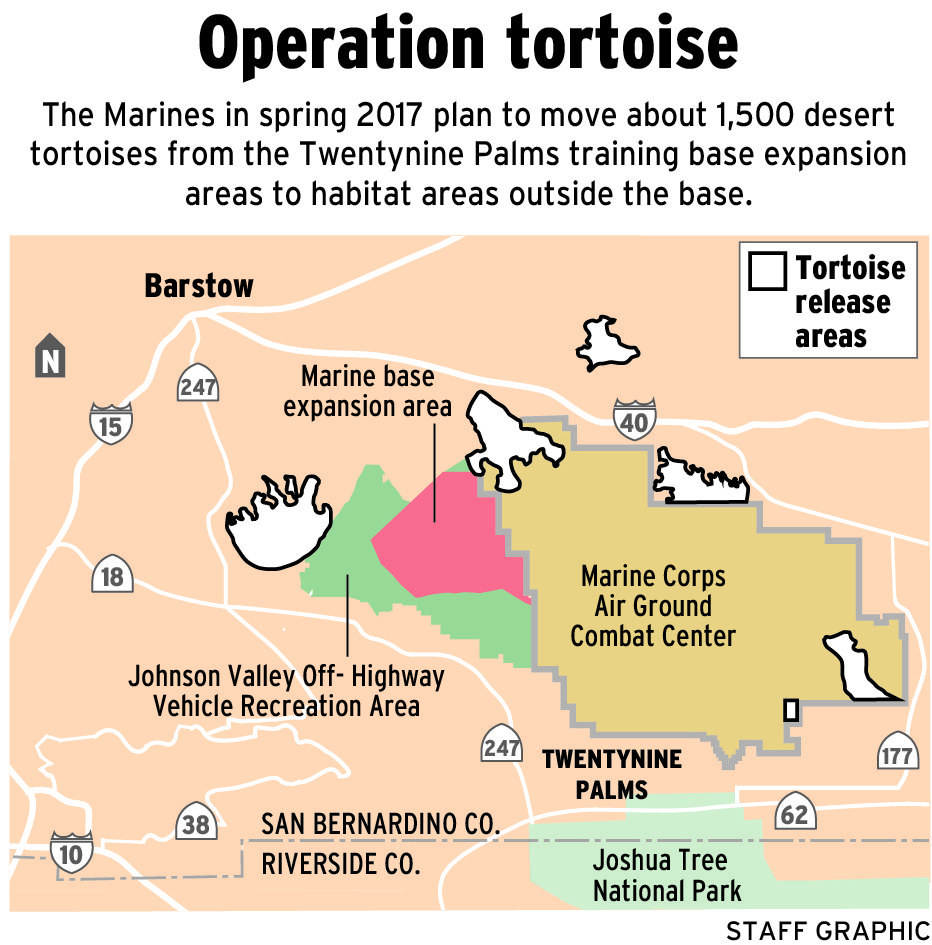 The Marines had hoped to clear the Johnson Valley expansion area of tortoises last spring and use the valley for live ammunition training exercises. But that was put on hold after an environmental group filed a legal notice, saying the environmental reviews were inadequate.

The Tucson-based Center for Biological Diversity specifically sought more analysis about how the move affected tortoises and other wildlife living in the release areas under the jurisdiction of the federal Bureau of Land Management.

Lisa Belenky, an attorney for the Center, said in an email that her group doesn’t agree with the conclusion of the new analysis that few tortoises would die, saying the new report relies on “anecdotal evidence about desert tortoise mortality.”

She said the center believes the move would significantly impact tortoises in the western Mojave Desert at a time when their population recovery is needed for the species to survive climate change.

The release of tortoises may attract hungry coyotes and other tortoise predators, increase competition for foods and other resources, and separate established social groups, Belenky said.

“The Combat Center is working hard to ensure successful translocation of desert tortoises,” the Marines said in an email statement. “Part of that effort includes careful selection of recipient sites for the tortoises.”

These sites were chosen for “low incidence of predation,” and farther distances from homes, where more coyotes live because they are attracted to human trash, according to the statement.

The relocation plan stems from a vote by Congress in late 2013 to add the Johnson Valley area to the Air Ground Combat Center, which made much of the valley off limits to offroaders.

Posted On 21 juillet 2016
Green sea turtles are hatching around the world from now through October. Only 1 in 1,000 hatchlings make it to adulthood. So how do these lucky…

Posted On 4 mars 2016
More than 1,400 of the imperiled desert reptiles will be moved from 29 Palms base expansion area RELATED MOJAVE DESERT:Tortoises born in captivity released into…

Go slow on Sunday and visit turtles, tortoises in Ventura

Posted On 18 mai 2016
Want to take things a little slow on Sunday? Then head to downtown Ventura for a visit with some turtles and tortoises. In observance of…