A tristate junction in south India seems to have been exporting tens of thousands of star tortoises every year. Are populations being wiped out ?

The Indian star tortoise is the most traded tortoise species in the world. Every year, thousands of them are confiscated mostly at airports. According to the Wildlife Protection Society of India, close to 8,000 were seized over a ten-year period between 1990 and 1999. But this number shot up in the following decade. Officials stopped more than 36,000 from leaving the country between 2000 and 2013. An overwhelming majority of these – about 20,500 – were confiscated from Tamil Nadu.

All these star tortoises were most probably picked up from the wild as there’s no evidence of a captive breeding operation. So how big is the trade?

Although star tortoises were traded throughout the 1970s, it’s hard to know when it really began. In 1991, Indraneil Das, a turtle and tortoise specialist, wrote that an estimated 10,000 were sold every year at Calcutta’s New Market. In 1993, reptile experts B.C. Choudhury and S. Bhupathy put the annual trade at 10,000 to 15,000. In an article for the Indian wildlife magazine ultimate bet poker download Thousand Oaks Sanctuary Asia, published in 2005, B.K. Sharma, a senior official at the Central Bureau of Investigation, estimated between 15,000 and 20,000 star tortoises were being traded every year.

Some of these animals may get a veneer of legality by transiting through other countries. The Convention on International Trade in Endangered Species of Wild Fauna and Flora (CITES) regulates trade in wild species between countries. The Indian star tortoise is listed under Appendix II, which allows trade as long as the wild populations aren’t affected. Since there are no studies of the species, we have no idea how badly affected they are by this prolonged trade in the species.

Between 1970 and 1994, about 9,000 Indian star tortoises were ‘legally’ traded. The CITES Secretariat was concerned enough to issue a notification asking member nations not to accept export or re-export documents unless they were verified with the secretariat. This had an immediate impact on the trade, which fell from 500 animals a year to 300. Then, inexplicably, the CITES Secretariat cancelled the notification in 1999.

Soon after, Lebanon, a non-signatory to CITES, entered the picture. According to the trade database, between 2003 and 2005, Lebanon re-exported Indian star tortoises that it claimed were captive-bred in Kazakhstan. However, Kazakhstan, a CITES-signatory nation, did not report exporting these in the first place. In fact, it hadn’t exported star tortoises at any time after 2000. Had there been a way to cross-check this information, Lebanon could have been stopped from trading in the species. In addition, it exported 6,000 more star tortoises of unknown origin.

In reply to a letter from Rom Whitaker, a trustee of the Madras Crocodile Bank, expressing concern over this trade, the Senior Enforcement Officer at CITES wrote that Lebanon was under investigation. He also pointed out it had captive breeding facilities for another tortoise species, the spur-thighed tortoise, hinting that it might have similar facilities for Indian star tortoises. In any case, Lebanon by its own admission didn’t claim to have facilities to breed star tortoises.

More than the dodgy origins of the tortoises, CITES thought the bigger problem was distinguishing wild-caught tortoises from captive-bred ones. The technology to identify captive-bred tortoises already existed. Argentina, for instance, micro-chipped captive-bred red-footed tortoises. CITES could have asked countries claiming to have captive breeding facilities to microchip their tortoises – but it didn’t.

By 2006, Lebanon was out of the picture. Perhaps CITES shut down its operations. This ought to have been good news for Indian star tortoises but things only got worse. Jordan replaced Lebanon in the trade. Between 2004 and 2014, Jordan exported 32,000 Indian star tortoises, of which it claimed 30,000 were captive-bred of unknown origin. Many of these tortoises with CITES documents were headed to Japan. Between 1999, the year the cautionary notification was cancelled, and 2014, it imported 38,000 tortoises. Taiwan came a distant second in imports. During the same period, between 48,000 and 60,000 star tortoises were traded globally with CITES documents.

Last year saw a lull for the first time in decades. Singapore exported 75 to the US, while Ukraine sent 20 to Mexico. That was it. What caused this slump in trade is unknown.

In November 2015, the results of an undercover operation, published in the journal  http://rackangel.com/13-cat/casino_11.html Nature Conservation, said that at one location in south India, at the junction of Karnataka, Andhra Pradesh and Tamil Nadu, 55,500 star tortoises were caught in the year 2014 alone. It wasn’t a mere estimate. Aniruddha Mookerjee of World Animal Protection, and one of the authors of this paper, said he had case sheets for every observed consignment. To make matters worse, the authors say this is a conservative estimate.

What are we to make of this figure? Was 2014 an exceptional year? Was this location a small or large hub? Were there other ones? Even if there was only one other hub, that would mean about 100,000 star tortoises taken from the wild every year. This is several times higher than any previous estimate. We really don’t know the size of the trade in the species. From where are poachers getting the star tortoises?

spin up casino no deposit bonus Nailing the kingpins 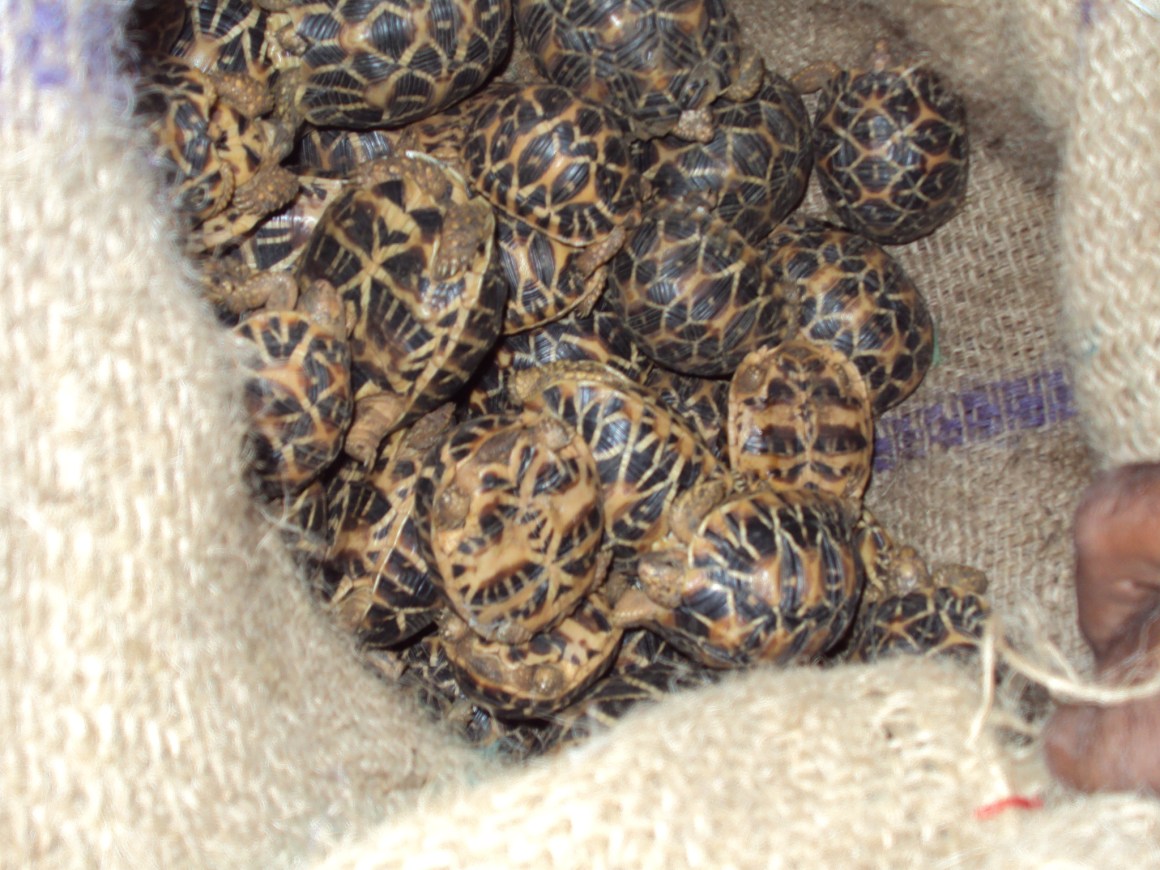 There are three populations of Indian star tortoises. The northwest population is found in Gujarat and Rajasthan in India, and in a tiny area in south-eastern Pakistan. These tortoises grow large and bumpy, and have many yellow lines on their shells. As they age, the colours become duller.

Star tortoises found in Odisha and all the four southern states are smaller with smoother shells and richer colours. The ones found in northern and eastern Sri Lanka look like they are hybrids of the two Indian populations. They grow large and bumpy like the northwest Indian ones and are colourful like the south Indian ones.

In parts of Sri Lanka, the species is so common that it is considered a pest in vegetable plots. Vegetable farmers dig trenches around their fields of beans and tomatoes to trap the tortoises. During the many years of civil war, Tamil rebels smuggled drugs and arms by sea. Although they had ample scope for smuggling star tortoises, there’s little indication they did.

The south Indian tortoises seem to form the bulk of the trade. In 2006, a few hundred star tortoises were repatriated from Singapore. DNA tests showed they were closely related to south Indian ones. A similar test in 2012 on animals repatriated from Malaysia found the same results. The free spins billionaire casino Nature Conservation paper indicated almost no poaching of the northwest population.

Many of the smuggled tortoises were destined for Bangladesh, Thailand, and Malaysia. Where do they go from these transit countries? Do they go to China? Or do they end up in Japan like the ones with CITES documents? We don’t know. And what needs to be done?

The highest priority is to conduct an undercover operation to nail the kingpins. All we know of the trade is that forest communities opportunistically collect tortoises during the monsoon months and store them at home. A healthy tortoise can survive for months without food. A trader visits their settlements and buys them for Rs 50 to Rs 300 each.

“When the traders have 2,000 to 3,000 star tortoises, they usually travel in air-conditioned coaches of long-distance trains to Delhi, Mumbai or even Indore,” says Mookerjee. The tortoises don’t move much in cool temperatures.

These couriers leave consignments of tortoises under benches in busy areas to be picked up by other couriers, says Jose Louies, the head of enforcement and law at the Wildlife Trust of India. There’s a hierarchy in the trade: the buyers don’t have direct contact with sellers and much of the transportation is done by couriers, who are unable to implicate others when they are arrested. No matter how many couriers are caught, trade doesn’t falter. Capturing the kingpins is vital to putting the brakes on the trade.

https://cocinademabel.com/17-cat/casino_15.html Questions about the illegal trade

Star tortoises don’t get much protection domestically. They are listed in Schedule IV of the Indian Wildlife Protection Act. Anyone caught trading them can get away by paying a fine of Rs 25,000. Elevating the species to Schedule I would act as a deterrent, since the punishment could be up to six years in prison. In addition, a Schedule I listing would prioritise protection. The under-staffed and overworked Wildlife Crime Control Bureau focuses on criminals trading in Schedule I species instead of busting its guts going after criminals who pay and walk.

Many in the American pet trade balk at any suggestion of greater regulation. They suggest captive breeding can keep prices low and protect wild populations. Breeders in the US breed large species like the African spurred and Hermann’s tortoises. One breeder offered to send 1,000 captive-bred spotted pond turtles, another species targeted by the pet trade, to India for release. Why haven’t they had better success with star tortoises?

Jerry Fife, a tortoise breeder in Arizona, produces a few star tortoise hatchlings a year. “I have only two pairs,” he says. “Breeding tropical tortoises is a pain as they can’t handle the cold. I have to keep them warm during winters, so I don’t focus on breeding them much.” Only a small percentage of the tens of thousands of exported star tortoises probably survive. Many die from the horrendous conditions in transit as well as high loads of parasites.

The 2015 CITES database figures may be an indication that the secretariat is watching. But if it were to allow trade in the species, it has to reissue an advisory to member countries asking them to verify documents. Or it should demand that only animals that can be traced with microchips be traded. To make the case for up-listing the species to Appendix I, India needs to show that wild populations are affected. This can happen only with research.

We know nothing about the impact of illegal trade on the species. Every article on star tortoise claims the numbers in the wild are decreasing. The tri-state junction mentioned in the Nature Conservation paper has been known to trade in star tortoises since the 1980s. Despite decades of exploitation, it still seems to export tens of thousands of the creatures every year. Are populations being wiped out? By now, the answer to any star tortoise question must seem like a refrain: we don’t know.

Janaki Lenin is the author of My Husband and Other Animals. She lives in a forest with snake-man Rom Whitaker and tweets at @janakilenin.

4 detained with 450 tortoises in Satkhira

Posted On 26 novembre 2015
Police in a drive arrested four people along with 450 tortoises from Machkhola village in Sadar upazila of Satkhira district on Wednesday. The arrestees were…

Posted On 18 mai 2016
The tortoises were wrapped up in sacks. The smugglers with forged permits got the animals from Nakapiripirit District. Uganda Revenue Authority (URA) has impounded 152…