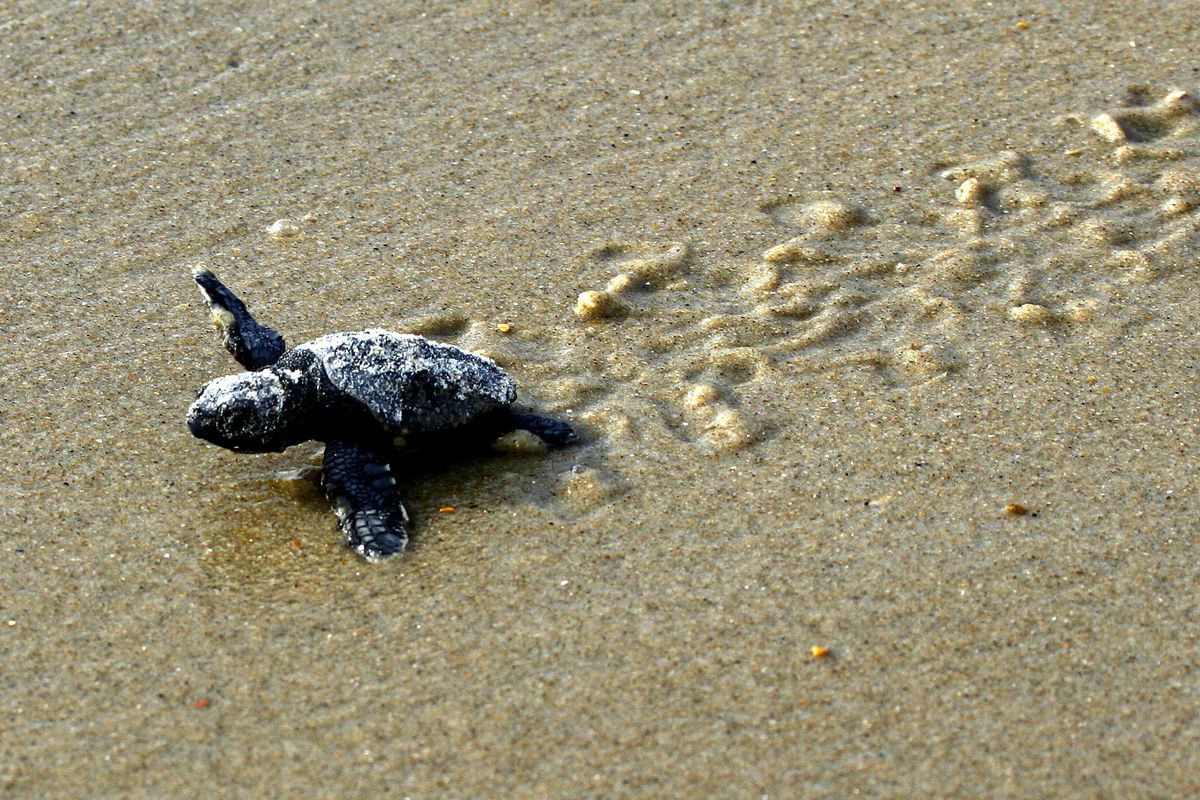 Sea turtle nests on Florida’s beaches are facing dangerous coastal flooding in the wake of Hurricane Irma, which has been downgraded to a tropical storm as it whirls toward Georgia. But well-meaning humans are sometimes bigger threats than they realize. Remember the bison calf in Yellowstone that tourists tried to “rescue” from the cold by putting it in their car? The calf’s herd rejected it after rangers tried to reintroduce it, and the calf was ultimately euthanized.

That’s why Fish and Wildlife officials warn that even if receding flood waters leave sea turtle eggs exposed, the concerned public should leave them alone: sea turtles will weather the storm.

IF YOU SPOT AN INJURED SEA TURTLE OR DISTURBED NEST, CONTACT:

Five species of endangered sea turtles lay their eggs on Florida’s beaches between March and October. The females drop 100 or so golf ball-sized eggs into a hole in the sand, then abandon the nest to swim back out to sea. The eggs incubate for about two monthsbefore the tiny hatchlings emerge and shuffle en masse to the water — navigating by light. (Artificial lights can mess with turtle navigation systems.)

If a storm hits during nesting season, many of the unhatched eggs could be washed out of their nest and scattered. Nests that are temporarily submerged may still be okay, however, since female sea turtles build the nests to drain well.

Sea turtles also know better than to put all their eggs in one basket, the Mote Marine Laboratory & Aquarium reports. A female sea turtle lays between five and seven nests each year, boosting her odds that even if some nests are washed out or eaten by predators like raccoons or fire ants, others might still hatch successfully. In 2004, when three hurricanes struck Florida, nearly half of the loggerhead sea turtle nests still hatched, which is a typicalsuccess rate, the Fish and Wildlife Service reports.

The Mote Sea Turtle Conservation and Research Program documented a record-breaking number of nests this year, but the sea turtles have already had one major storm to contend with. At the beginning of August, Tropical Storm Emily struck Sarasota County, washing the protective, sandy covering away from many sea turtle nests. Some hatchlings were discovered floating in a nearby swimming pool.

It’s not just counterproductive to disturb eggs, hatchlings, and injured turtles, either: it’s against the law. Instead, it’s better to call the Mote Marine Laboratory or email the Florida Fish and Wildlife Conservation Commission (see the sidebar). To help the turtles, you’ll want to summon someone who knows how.

Posted On 5 août 2015
The cell phone in her pocket began ringing, rudely interrupting Lyndsey Howell's Sunday as she weeded peppers and tomatoes in the garden at her Galveston…

Posted On 9 janvier 2018
Still in Britain, for the first time in about 500 years, Britain’s famous Kew Gardens has opened to the public a large swathe of woodland…