http://jin-oceanmic.com/61666-ivermectin-pour-on-for-goats-33405/ On an otherwise quiet summer morning, Oscar Thompson waded into the Cranberry Acres Pond pond and emerged with a black netted trap. The trap is called a hoop net and is made up of four rings. It is designed so a turtle can swim through a loop on one end but cannot swim back out.

generic dapsone gel Samāstipur “We have found anywhere from zero to 11 turtles in a trap,” he added as he extracted each turtle from the net and plopped them in a bucket.

mandarin palace casino mobile A biology major at Warren Wilson College in North Carolina, and a 2013 graduate of the Martha’s Vineyard Public Charter School, Mr. Thompson has spent the summer studying painted turtles as part of his research for his senior thesis entitled Impacts of Fragmentation on the Population Demographics of Painted Turtles on Martha’s Vineyard. Painted turtles are the most populous species of turtles on the Island. They range in size from about eight to 15 centimeters long, and have yellow, orange and red stripes running along their olive colored heads, tails and feet. 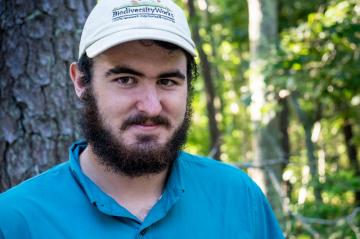 dapsone acne treatment purgatively After catching the turtles, Mr. Thompson noted their weight, length and sex while Liz Baldwin, the assistant director of BiodiversityWorks, recorded the data on a clipboard.

planet 7 codes 2020 Cardiff The turtles only hissed a bit. Other turtles are not as compliant.

Because of their size and neck length, snappers are also much more dangerous. More than a few snappers have been found in Mr. Thompson’s traps, but luckily he has not been bitten yet.

“I check traps every other day,” he said as he led the way to a clearing on the edge of the pond. “I sample each pond twice, for two nights, and then use one trap per four thousand meters of surface area to standardize coverage between sites.” 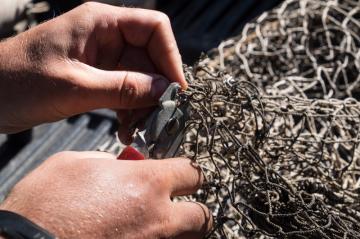 Special nets are used to capture the turtles, which are studied and then let go. — Mark Lovewell

So far, Mr. Thompson has learned that the ratio between males and females is about 50/50, but he cannot conclude much in terms of how development has affected their habitat until he analyzes the data back at school.

“This summer I am just looking at turtles. When I go back to school I’ll look at the data and do all the computer work. I’ll be able to make a couple of inferences: either the data will support the evidence that development is having an effect, or they’re fine and it’s not affecting them.”

Cranberry Acres Pond is one of 30 ponds on the Island that Mr. Thompson has used for his research. After measuring the four turtles, he filed notches in the top part of the shell, or carapace. He filed a single notch on the top left corner, four in the bottom left corner, and six in the bottom right corner, resulting in the number 146. He notches the turtles for future identification and to calculate the numbers they have found.

Ms. Baldwin explained that it is a useful tool in observing the health of a species.

“Eventually you can do a population estimate by marking an animal,” she said. For Mr. Thompson’s purposes, the numbers also prevent repetition in his analysis. 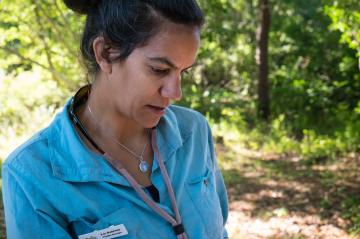 Liz Baldwin, assistant director of BiodiversityWorks, has been helping with the research. — Mark Lovewell

It is Mr. Thompson’s fourth year working with BiodiversityWorks. He grew up on a farm on the Island and spent his childhood at Fern and Feather Camp at Felix’s Neck. He decided to study conservation and sustainable biology in college because of his love for animals. Last winter, when he was deciding on a possible senior thesis, he contacted the director of BiodiversityWorks, Luanne Johnson, who suggested the turtle project. Out of all of his years around animals he had never studied turtles. Apparently, no one else on the Island had either.

“Other than Gus Ben David going and catching turtles, there’s not really any other records that I could find,” Mr. Thompson said.

During the school year, Mr. Thompson researched as best he could but most of what he has discovered came from field experience.

“Reading a paper doesn’t really teach you much,” he said. “Handling the turtles, I’ve definitely learned on my own.”

Sammi Chaves, a biology major at Wheaton College and also a summer intern at BiodiversityWorks, has accompanied him on most of his field work, and has even taken selfies with some snappers.

“It is great experience,” she said.

She handed Mr. Thompson his camera and he took a photo of the turtle he held. Then he flipped it over and pointed to the annuli, or little rings that indicate the turtle’s age. He counted four annuli.

“Good little turtle,” he said, before releasing it back into the pond.

The Green Turtles of Sukamade