The illegal turtle trade: Why some scientists keep secrets

para que es gabapentina 100 mg Puducherry I could tell you where I work, but then I’d have to kill you.

ivermectol 12 mg tablet price OK, not really; that seems extreme. But I might blindfold you if I took you there. Now you’re wondering what kind of work could justify such secrecy.

neurontin and tramadol westerly Turtles are in trouble. Some researchers have even used the term « crisis » to describe their plight. This turtle decline is a global issue, affecting freshwater turtles, tortoises and sea turtles. Two-thirds of turtle species are at risk of extinction.

After more than 200 million years of plodding around the globe unchallenged and anatomically unchanged, turtles could now be facing their final lap.

We’re their biggest threat. Turtles are crushed by cars and buried alive by bulldozers. Their habitats are whittled away by our insatiable appetite for big box stores and waterfront condos.

Their otherwise formidable shells were not designed to withstand these human assaults, because humans weren’t a threat when this turtle armour was first making its appearance in evolutionary time.

The World Wildlife Fund Living Planet Report asserts that populations of vertebrate animals have decreased in abundance by 58 percent in the past 50 years. Over-exploitation, second only to habitat loss and degradation, is a major threat to animal populations.

Turtles are not excused from such exploitation, which includes unsustainable harvesting and bycatch during other resource extraction activities such as fishing. Turtles and tortoises are eaten with religious zeal, their eggs and body parts consumed under false promises of improved health, greater longevity and a better sex life. 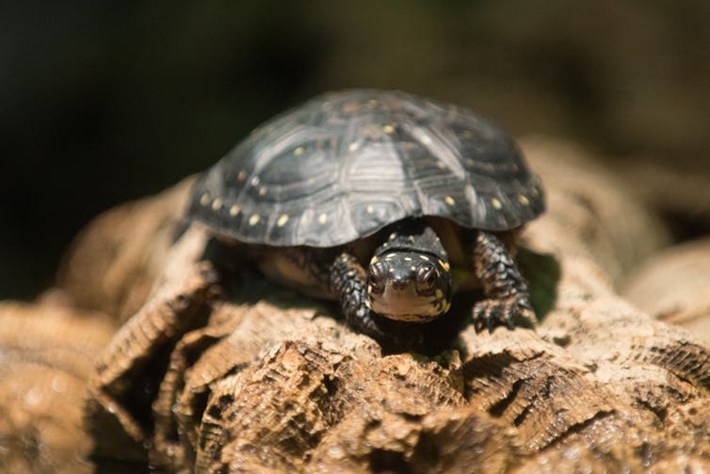 Spotted turtles concentrate at breeding sites in the spring, making them an easy target for poachers. Image: D Coetzee/Flickr

Many species are collected for the pet trade. Their generally passive demeanour and amazing beauty have contributed to turtle declines, as these traits are highly valued in pets.

The reproductive adults collected from the wild for the pet trade are essentially dead, as far as the population is concerned. Take one from its habitat and the potential for future babies is gone. No babies means, eventually, no population.

Turtles are bet-hedgers. Once an individual gets past the dicey egg and juvenile stages, it is essentially immortal – barring encounters with any human threats. Individual turtles can live for decades, some for more than a century.

But the persistence of the population relies on adult females. A female’s reproductive lifespan is unencumbered by menopause; in fact, she gets better with age. Older females produce bigger and better clutches of eggs. But those eggs and juveniles are tasty morsels for numerous predators – most turtles don’t make it to adulthood, although they do contribute to food webs in an important way.

But that’s OK. As long as the adult females survive, they can hedge their bets by producing clutches of eggs every year, banking on a payoff in a good year, so that each female replaces herself and the population continues on according to natural processes.

So that’s why I can’t tell you where I work. You see, you might be a turtle poacher. I trust no one, and I want my turtles to remain safe and sound in the wild.

Two of the species that my research group works on, spotted turtles (Clemmys guttata) and wood turtles (Glyptemys insculpta), are listed as endangered in Ontario, and are highly sought after by the pet trade. 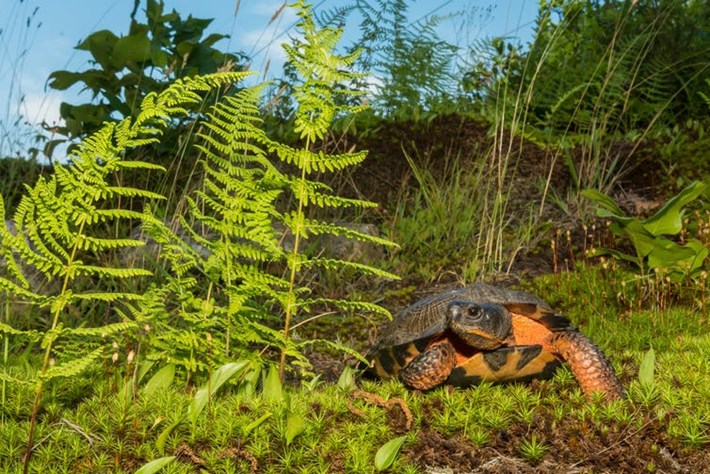 One of the wood turtle populations in Ontario was hit by a suspected poaching event in the 1990s. I say « suspected » because no one has yet been able to prove it.

Here’s the story: 70 percent of the turtles disappeared in a blink of time, and we didn’t find their bodies. The evidence suggested that their vanishing was not due to a mass predation event or a disease outbreak.

Word on the street is that some of those turtles are still alive in a basement in Ottawa, where they are being used to pump out offspring to be sold in the pet trade.

What remains of that Ontario population has been subjected to intensive and expensive management for 15 years in an attempt to bring it back from the brink of its projected extinction.

Into the poachers’ arms

So how did the alleged poacher find out about the population? Good question, but hard to answer. Research began at the site in the late 1980s. The scientists thought their data reports would be safe in their desk drawers and bookshelves. But then came the internet and the digital age, and it became easier for the general public to access such documents.

The turtle trade has been compared to the gun and drug trades; it is that networked, clandestine and lucrative. Young, purportedly captive-bred wood turtles sell for hundreds of dollars a piece on the internet. Adults are hard to find for sale: they are often the wild-caught individuals and kept as breeders.

Within just a few years, two turtles can become dozens, and can net a poacher thousands of dollars in the legal trade. 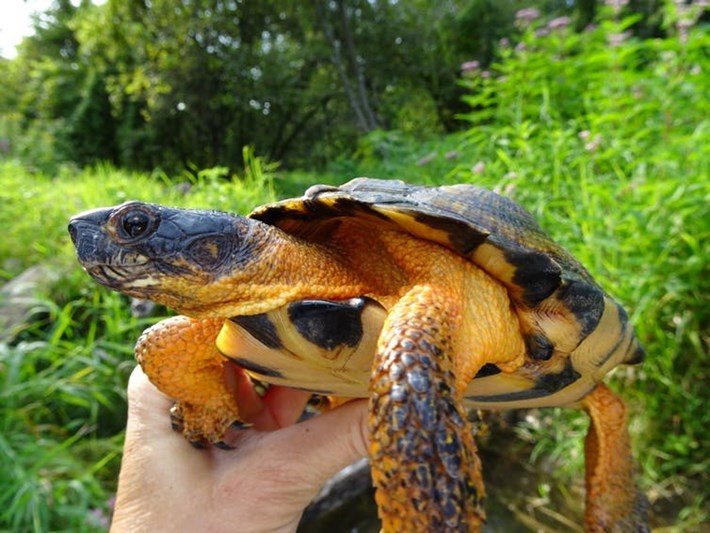 I recently attended a scientific conference focused, not surprisingly, on turtles. Even in this situation, surrounded by like-minded scientists and conservation professionals, my students and I keep our study site information under our hats.

Good thing. As I listened to other conference presenters reveal too much, I learned that there was, in fact, a previously convicted turtle poacher attending the conference. My MO of secrecy was unfortunately justified.

You just never know what lengths unscrupulous people will go to, so it’s best not to make things easy for them, especially when turtles already face a host of other harder-to-control threats.

So, I could tell you where our research sites are located, but then, of course, I’d have to kill you.

Posted On 10 novembre 2015
KARACHI: The Sea View beach strip was swarmed by at least 42 black-spotted turtles on Saturday after alleged poachers abandoned them at the shore, fearing arrest.…

Posted On 12 juin 2015
Police in Tilburg have appealed for information following the discovery of dozens of dead reptiles which were dumped in the woods. A council worker stumbled…