— What do you call a group of new astronaut trainees who are a tad green around the collar, a bit shell-shocked at being selected and who together faced having their new home submerged underwater just as they arrived at NASA?

Astronaut group nicknames are generally selected by the members of the preceding class and very often poke fun at some characteristic that is common to the new trainees. In the case of the « Turtles, » that was Hurricane Harvey, which flooded major portions of Houston within a week of the 14 astronaut candidates (« ascans ») reporting for their first day on the job at Johnson Space Center on Aug. 21.

« On fenceposts, in a Harvey flood, » said Ochoa, describing a photo she shared of a cake baked in the new astronauts’ honor, with 14 green and brown turtles stranded on posts, all protruding from a blue water-like icing.

The fenceposts were very likely a nod to another common trait of astronaut class nicknames — that they have a dual, slightly-derogatory, but humorous meaning.

The 12 NASA and two Canadian Space Agency « Turtles »are starting out their careers in space at a time when their future mission assignments are somewhat up in the air.

Once they pass their basic training, the 14 new astronauts may join expedition crews onboard the International Space Station, perhaps launching on new Boeing or SpaceX crew capsules expected to enter service in the next two years.

Or they might be assigned to future exploration missions, to the moon or beyond, on NASA’s Orion spacecraft, lifting off atop the Space Launch System (SLS) heavy-lift rocket, with flights beginning possibly as soon 2019. 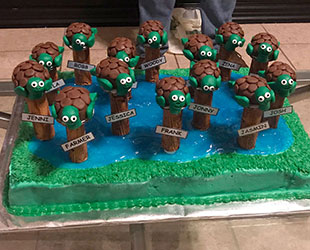 The uncertainty surrounding their path forward and the fact that they represent new competition for flight assignments may have brought to mind a joke about the « post turtle. »

« An old rancher is talking about politics with a young man. [when he] compares a politician to a post turtle, » describes Wikipedia in its entry for the phrase. « The young man does not understand and asks him what a post turtle is. »

The man explains, « When you are driving down a country road and you see a fencepost with a turtle balanced on top of it, that’s a post turtle. »

« You know he did not get up there by himself. He does not belong there; you wonder who put him there; he can’t get anything done while he is there; and you just want to help the poor, dumb thing down, » says the rancher.

A Turtle by any other name

« The Turtles » had their own idea for a nickname, stemming from their interviews when applying to be an astronaut.

« Our group purchased this [board] game called « One Night Ultimate Werewolf, » recalled Moghbeli in an interview with collectSPACE in June. « We got so into it, and played it so often, that almost every one of us ended up talking about it in our interview. It became a big thing, and then it carried on to the next groups. »

Moghbelli and her fellow applicants drew a werewolf on a marker board used by the different interview groups, which strengthened the association across the applicants.

« So we [were] talking about ‘The Werewolves,' » she said, « but I highly doubt they’d give us such a cool nickname. »

« The Turtles » won’t be the first turtles in space. Almost 50 years to the day that the new astronauts were given their nickname, two tortoises lifted off into history as among the first living creatures to survive a trip to the moon and back.

The two Horsfield’s tortoises launched on Sept. 14, 1968, aboard the Soviet Union’s Zond 5 spacecraft. The mission marked only the second circumlunar flight, and the first to carry Earthlings to the moon.

More Russian turtles flew as part of the Soviet Bion series of biosatellites and on the Soviet Salyut 5 space station in the 1970s. Iran later launched turtles aboard its Kavoshgar rocket in 2010.

U.S. space missions also included turtles — though of the humankind. 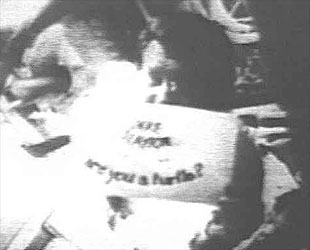 The « Ancient and Honorable Order of Turtles » began as an informal drinking game between pilots in World War II, but was a favorite « gotcha » (practical joke) among the Mercury astronauts.

Under the rules of the club, if one member asked another, « Are you a Turtle? », the latter was required to immediately reply, « You bet your sweet ass I am, » less he owe the other one a drink. (It was presumed that all of the Turtles had a diabetic donkey, or one of a kindly disposition, hence the « sweet ass. »)

In 1962, the game reached its apex when astronaut Deke Slayton radioed his fellow classmate, Wally Schirra, during the Mercury-Atlas 8 mission, « Hey, Wally, are you a turtle? »

Wanting to avoid saying « ass » over the open comm but not wanting to owe Slayton a drink once he was back on the ground, Schirra switched off his live mic and recorded the appropriate answer. « Rog, » he then replied, toggling back to his connection with Mission Control.

Posted On 28 mars 2017
Scientists have developed a new Avatar-style technology that allows a human controller to remotely manoeuvre a turtle's path just using their thoughts. In the 2009…

Posted On 29 avril 2017
A WELLINGTON Point man has saved a one-metre long turtle in a two-hour rescue during which he made a sled and pulled the animal into Moreton Bay.…

Another year, another rare tortoise hatched in Yokohama