Millions of years ago, before the Southwest was a desert, the Las Vegas Valley had lakes, marshes and streams that fed plentiful vegetation and animal life, including desert tortoises.

As recently as the mid-1900s, the wild reptiles were a common sight, regularly seen wandering in uninhabited and undeveloped parts of the valley. Today, the population is diminished, and desert tortoises have disappeared from many areas of their historic range.

Here’s a look at why they’re disappearing from the desert, and why that matters.

1. The desert tortoise is Nevada’s state reptile. 2. It is the largest reptile living in the Mojave Desert. 3. Desert tortoises can walk almost a mile a day. 4. There are more than 40,000 desert tortoises in captivity in Clark County alone. 5. They produce a variety of sounds: hisses, grunts, pops, whoops, huhs, echs and bips.

Desert tortoises have domed shells with well-defined growth lines and yellow underbellies. Their hind limbs are elephant-like, while their forelimbs are shovel-like for digging. The tortoises can withdraw their heads and limbs into their shells, leaving only horned scales visible to predators.

As a desert adaptation, the tortoises can store water in their bladders for months, and their skin and shell are waterproof. During dry spells, they switch from excreting urea, which contains lots of water, to uric acid crystals. When water is available, however, a tortoise’s bladder can store more than 40 percent of its body weight in water, urea, uric acid and waste. 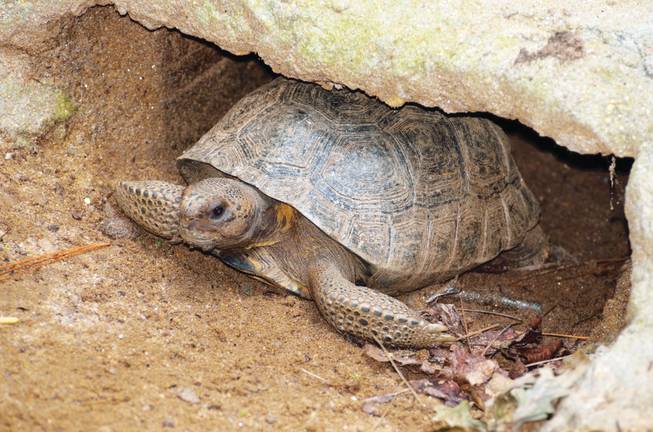 Desert tortoises dig burrows in the ground, in which they spend up to 95 percent of their time. During summer, they dig shallow burrows to escape the heat; in winter, they hibernate in deeper burrows, up to 30 feet underground. The tortoises typically use multiple burrows during summer but dig only one winter burrow, which they use year after year. Winter burrows often are communal.

Desert tortoises are diurnal, meaning they are active during the day. Most of their activity is done in the morning. They also are most active from March to June and September to October.

Desert tortoises eat grass, cacti, flowering plants, insects and larvae. Water is obtained mostly from vegetation, although they do drink from puddles during and after rainstorms.

During breeding season in late summer or fall, male tortoises ram each other to establish dominance and compete for female attention.

Females typically lay 4-12 eggs, usually from May to July. In dry years, females may lay no eggs. However, female tortoises can store sperm for five years or longer, so they can reproduce for several years after mating.

The females deposit eggs in a shallow hole near the burrow entrance. Hatchlings emerge in late summer or fall, and the mother leaves, abandoning her babies to make it on their own. Only about 2 percent reach adulthood. The shells of juvenile desert tortoises are leathery and can take five years or more to harden, making them vulnerable to predators.

Importance of the species

Desert tortoises are listed as a threatened species under the federal Endangered Species Act. They are state protected in Nevada.

Wild desert tortoise populations have declined dramatically over the past 60-plus years because of urban development, disease, traffic and illegal collection.

Because juvenile tortoises mature slowly and are vulnerable to predators, and because desert tortoises don’t reach sexual maturity until about 15 years old, populations have struggled to recover.

In some areas, mostly in the western Mojave Desert, the number of desert tortoises has decreased by 90 percent, primarily due to human activity. Recent estimates indicate there are about 100,000 desert tortoises remaining in the Mojave and Sonoran deserts. As late as the 1950s, the population averaged more than 200 adult tortoises per square mile. More recent studies show 5-60 adults per square mile.

Habitat protection is crucial for the survival and recovery of desert tortoises, so federal, state and local officials have protected large tracts of undisturbed, undeveloped land in Nevada. They have also limited grazing and off-road activities for the benefit of the tortoises. Populations are monitored in Nevada, and research is being done on tortoise biology and diseases.

Desert tortoises may be kept as pets in Nevada, but the animals are considered wildlife and the people who possess them custodians, not owners. Tortoises can thrive in captivity but require a secure yard to prevent escape, an insulated burrow, plants to eat and access to water and shade.

However, breeding domesticated desert tortoises does not promote the recovery of the species in the wild. Releasing pet tortoises can harm wild populations by introducing disease and unsuited genetic strains. Captive tortoises, if not properly managed, can breed and multiply quickly, so wildlife officials prefer only one tortoise per home.

More than 1,000 unwanted or stray pet desert tortoises are surrendered or abandoned each year in Nevada. State law prohibits them from being taken out of state, so if someone moves, another home in Nevada must be found.

What can I do?

Donate. As little as $20 can help protect desert tortoise habitat and aid researchers in evaluating the impact of climate change and human activity on the species. One place to give: defenders.org.

Adopt. The Tortoise Group has close to 100 scaly friends available. And it’s the only agency legally empowered to adopt out captive tortoises in Nevada.

Lobby. Ask your elected officials to consider how projects and laws may impact desert tortoises and other wildlife.

Advocate. Tell your friends in town and on social media that you’re for desert tortoise preservation.

Posted On 14 janvier 2018
By Henry Brean Las Vegas Review-Journal It all began with the tortoise. In 1990, federal officials listed the Mojave Desert species as threatened across its…

To Save Desert Tortoises, Make Conservation a Real-Life Video Game

Posted On 11 mai 2017
After spending the last three months under the watchful eye of their own personal retinue of bodyguards, nine endangered royal turtles successfully broke free from…