On beaches from North Carolina to Texas and throughout the wider Caribbean, one of nature’s great seasonal events is underway. Adult female sea turtles are crawling out of the ocean, digging deep holes in the sand and laying eggs. After about 60 days, turtle hatchlings will emerge and head for the water’s edge, fending for themselves from their first moments. 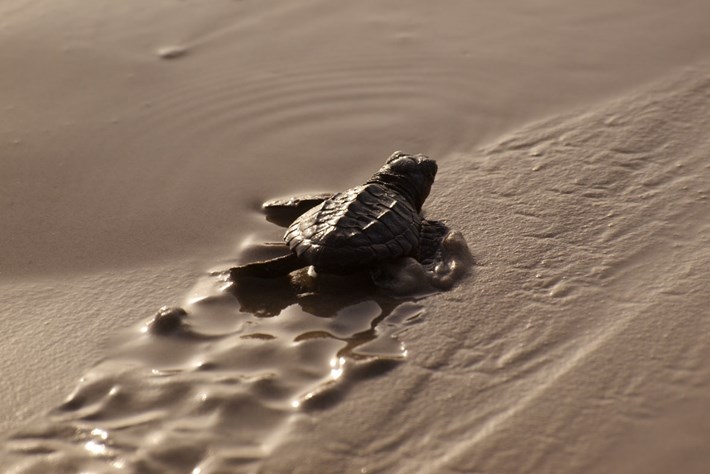 A Kemp’s ridley hatchling makes its way to the water on Padre Island, Texas. Terry Ross

I have spent 36 years studying sea turtle ecology and conservation. All seven species of sea turtle found around the world are classified as vulnerable or endangered. Nesting season is an important opportunity for us to collect data on turtle abundance and trends. For those of us who have spent decades studying turtles on nesting beaches, anticipation builds as we prepare for their arrival. And when that first turtle comes ashore to usher in the nesting season, it feels as though we are welcoming home old friends.

Today most coastal areas in the United States protect beaches during nesting season. Government agencies, researchers and volunteers monitor many beaches and help hatchlings make it to the water. These measures have helped turtle populations increase. For example, the critically endangered Kemp’s ridley sea turtle (Lepidochelys kempii), which was on the brink of extinction in the mid-1980s, has increased from a few hundred nests to over 20,000 nests laid in 2017.

But turtles face many hazards in the water, including plastic pollution and accidental harm or death in encounters with commercial fishermen. The future of sea turtle research depends on finding new ways to assess turtles’ status and trends at sea as well as on the beach. 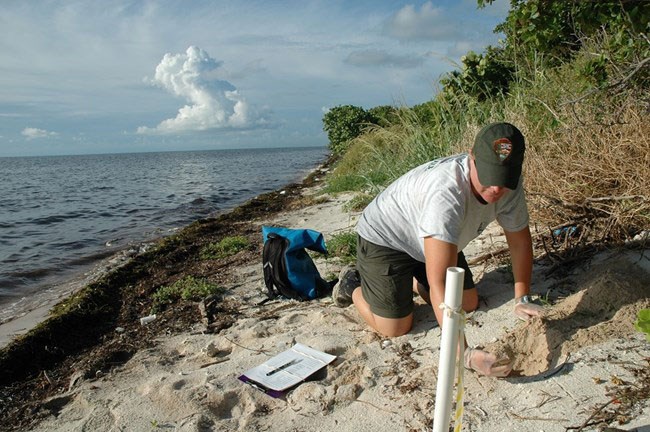 Female sea turtles typically nest several times in a year. They may leave all of their eggs at one specific beach or nest at several beaches to spread out their reproductive investment. They typically return to the same stretch of coast year after year.

To monitor population trends, scientists count the number of nests made on a beach during an entire nesting season. They estimate how many times an individual female turtle nests during one nesting season, and use simple arithmetic to calculate the estimated number of females that nested that year.

We also walk nesting beaches to find individual turtles, collect data and biological samples from them and attach tags to their flippers. If researchers re-encounter a tagged turtle during a subsequent nesting season, they will record her return and revise their estimate of how many offspring she produces. Sea turtles typically nest every two, three or four years, so biologists need long-term data over multiple decades to track population trends.

On a few beaches, olive ridley sea turtles (Lepidochelys olivacea) emerge synchronously and en masse to nest in enormous groups of hundreds to thousands, known as arribadas (Spanish for “arrival”). When this happens there are so many turtles nesting at one time that a person could walk from shell to shell across the beach without stepping on the sand. It is impossible to count most of these turtles, and finding a tagged individual from among the throngs is like looking for a needle in a haystack.

Witnessing an arribada is the most thrilling wonder of nature I have experienced. The sight, smell and sound of thousands of turtles on a beach digging holes in the sand and laying eggs, choreographed to music only they can hear and understand, is indescribable. 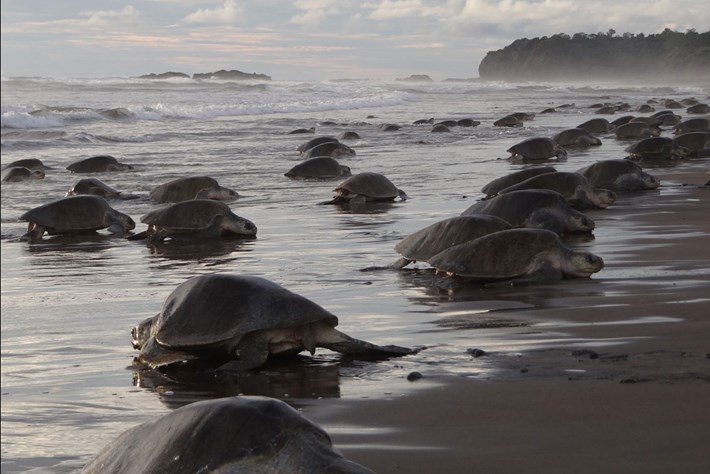 Although researchers have used these methods for decades, they do not give us a full enough picture to assess how well global conservation efforts are working.

One challenge is that there are too many turtles and not enough funding to record every nest at most beaches. Many nesting sites are remote, hard to access and logistically challenging places to live and work for months at a time. There are tens of thousands of miles of coastline where no one counts sea turtle nests regularly and systematically.

Second, turtles don’t always produce the same number of young from one season to another. Like all animals, they invest their energy into metabolism, growth, survival and reproduction. When food is limited, they often lay fewer eggs.

Third, and perhaps most importantly, breeding females are not the only important sea turtle demographic group. Biologists want to develop population models they can use to interpret population changes, identify threats in marine habitats, predict risk, evaluate the impacts of management activities and assess sea turtle status and trends. To do this, we also need other demographic information, such as age-specific and sex-specific survival rates and age at sexual maturity. Researchers are trying to collect these kinds of data, but it is logistically challenging when we are dealing with turtles at sea. 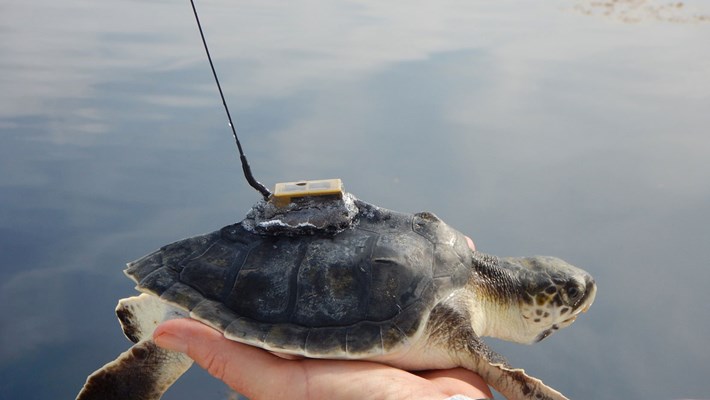 Hazards in the water

These constraints help to explain why a recent study to develop a stock assessment model for Kemp’s ridley sea turtles found that the population was growing at a slower rate than scientists had anticipated. The study did not identify a specific cause, but it took many demographic variables into account, as well as conservation efforts and turtles killed by fishermen. All of these factors are critically important to assessing a population’s status and projecting its future growth.

Another recent study showed that since the 2010 Deepwater Horizon oil spill in the Gulf of Mexico – the prime residence area for Kemp’s ridleys – the turtles have produced fewer young. The spill triggered significant environmental changes in the Gulf, across multiple habitats and species including invertebrates, birds, fish and dolphins.

Oil spills aren’t the only threat. According to a recent estimate, the Pacific Ocean garbage patch covers an area “twice the size of Texas.” According to some projections, by 2050 the oceans will contain more plastic than fish.

Read more: This South Pacific island of rubbish shows why we need to quit our plastic habit

Ocean plastic can kill marine animals when they are ensnared by it or ingest it in large quantities. Scientists have found many species feeding on ocean plastics, from fish living in the deepest ocean trenches to seabirds feeding at the surface. Since the early 1980s, I have studied sea turtle diets and have found plastic in the stomachs and intestines of virtually all sea turtle species from the Gulf of Mexico to the Pacific Ocean.

Some advocates assert that most of this trash comes from fishing gear. Fishing certainly is a major source: One survey of the Pacific garbage patch found that broken fishing nets comprised nearly half of it by weight.

But consumer items, like toys and plastic bottles, are also part of the problem. In 2015 a Texas A&M University research team was taking samples from a 77-pound olive ridley sea turtle and found a 4-inch plastic drinking straw completely embedded in its nose, potentially making it harder for the turtle to breathe and smell – and thus to find food. Video footage of these researchers removing the straw from the turtle’s nostril, which has been viewed online more than 10 million times, offers convincing evidence of how much suffering plastic trash can inflict on wildlife.

Overfishing also threatens sea turtles and other non-target animals, such as marine mammals and seabirds. Researchers believe that fishing pressure in the Pacific Ocean is the primary cause of a recent collapse of the leatherback sea turtle (Dermochelys coriacea) population in the eastern Pacific, and now threatens the dwindling western Pacific leatherback.

Climate change is triggering changes in ocean temperature, chemistry, circulation and sea levels. These shifts also threaten sea turtles, but there is little quantitative research so far on how they will affect any species.

The world’s oceans are changing at an unprecedented pace, and scientists’ methods for assessing sea turtle populations must evolve rapidly too. We need new research tools for observing ocean conditions above and beneath the surface, as well as robust population models that incorporate these new threats, to manage these globally protected species.

Posted On 31 juillet 2014
SRIKAKULAM: Southern India's only temple dedicated to Lord Vishnu's second avatar Srikurmanadha (in the form of a tortoise) in Srikurmam, a tiny village 15 km…

Go slow on Sunday and visit turtles, tortoises in Ventura

Posted On 18 mai 2016
Want to take things a little slow on Sunday? Then head to downtown Ventura for a visit with some turtles and tortoises. In observance of…