“For diseases, we’re certainly interested in what makes them susceptible, the connection — we study this in humans, too — between their diet and their environment and their stresses, and their ability to fight off diseases, » said Kusumi.

The research was published May 31 in PLOS ONE.

Mojave desert tortoises face threats from various quarters. Invasive grasses like red brome can stunt their early growth and may reduce their resistance to illnesses — including upper respiratory tract disease (URTD), which afflicts the nose, nasal sinuses and trachea of some of the creatures. Humans threaten their survival by destroying habitat and building power lines, which provide new perches for predatory ravens. 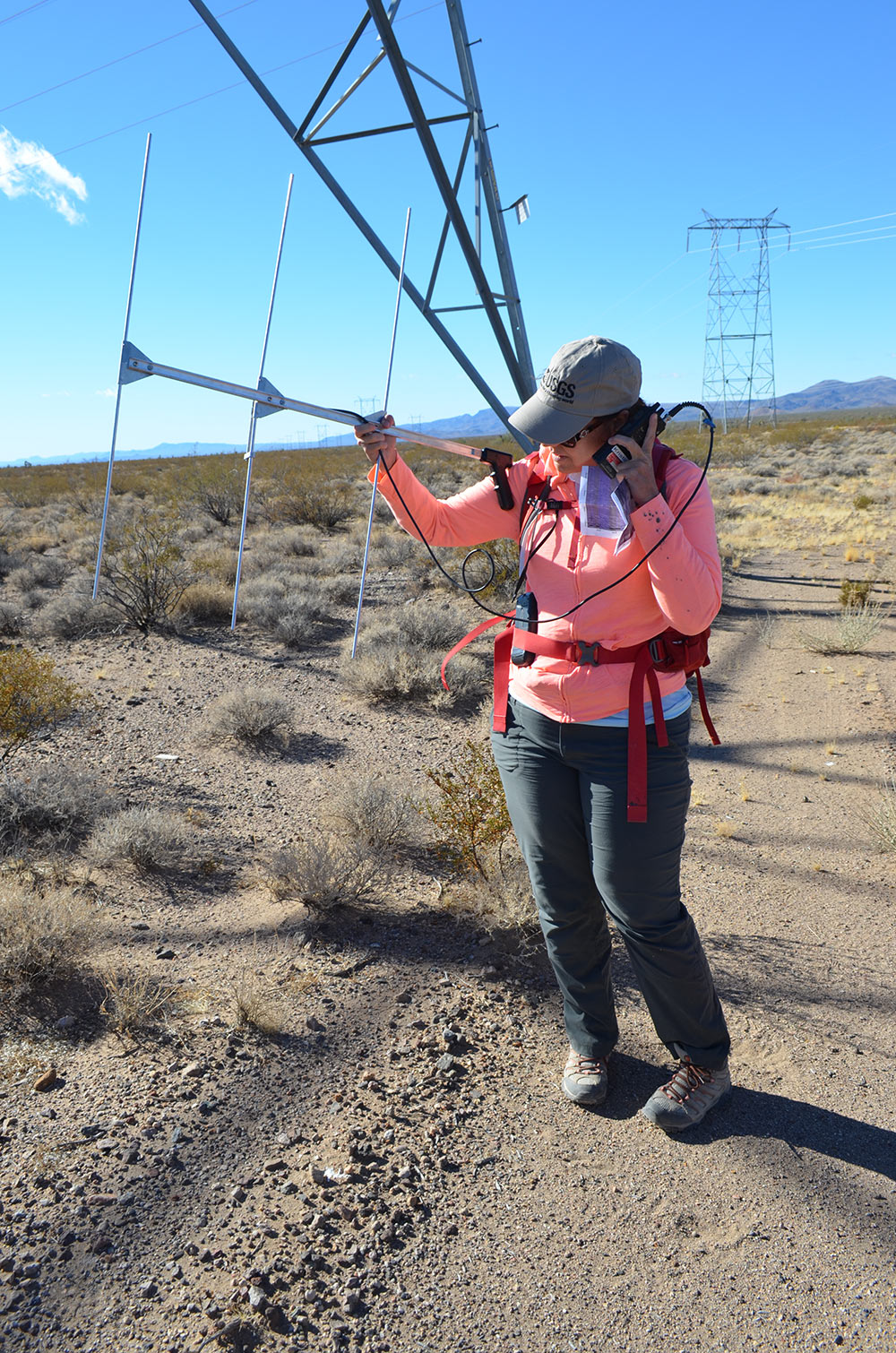 VIEW LARGER A researcher with the U.S. Geological Survey searches for the signal from GPS-equipped tortoises. (PHOTO: Sandra Leander/ASU)

“It’s a new habitat for the ravens. It’s great for them, but it’s bad for baby tortoises, which they like to look at and then swoop down and eat,” said Kusumi.

Based on comparisons with other existing reptile genomes, the study found changes in Mojave desert tortoise genes that regulate shell development, longevity and water conservation.

The U.S. Fish and Wildlife Service listed the Mojave population that is located north and west of the Colorado River as threatened in 1990. Nevertheless, its numbers declined by about 50 percent from 2004 to 2013. 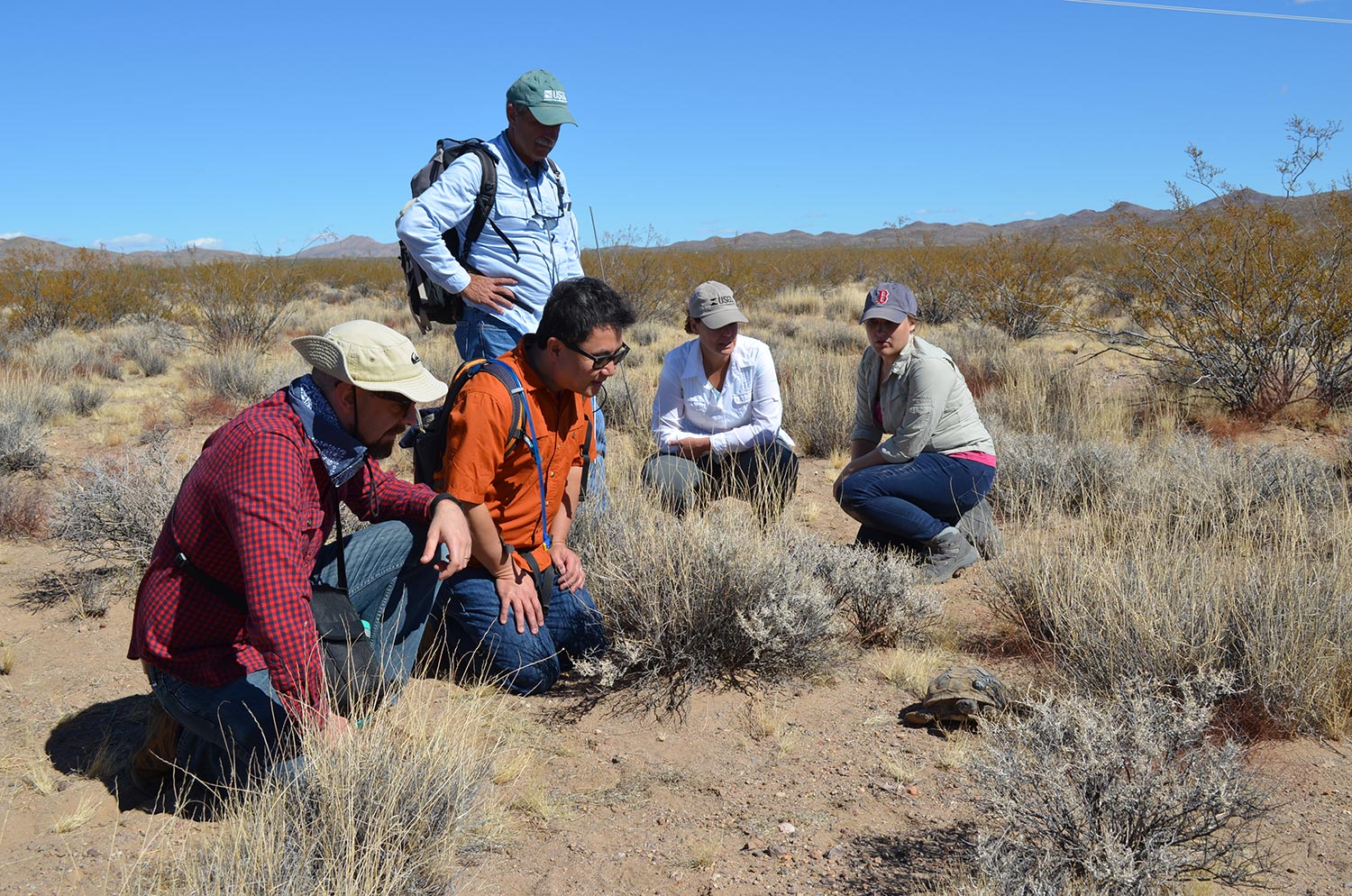 Understanding genetic variation and responses could help wildlife managers better grasp how disease and inbreeding affect the reptiles. Kusumi said it could also help scientist understand how the creatures adapt to their environs by isolating genes related to withstanding ultraviolet radiation and controlling urine volume.

“We don’t really know where the genetic treasure in the gold mine is. Where is the diversity that would allow the tortoise, as a species, to survive changes?” said Kusumi.

A clearer picture of Mojave desert tortoises’ genetics and biodiversity could also improve management of reproduction and maintenance of habitat corridors, particularly under conditions of climate change. It would also help nail down the species’ geographical range, which overlaps with the Sonoran desert tortoise, aka Morafka’s desert tortoise (Gopherus morafkai). The two desert tortoises sometimes mix boundaries and interbreed.

“We’re trying to answer, based on using the genome, where is the Mojave desert tortoise? Because we actually don’t know exactly where that boundary is right now,” said Kusumi.

Mojave desert tortoises live 40-50 years in the wild and more than 100 years in captivity. Dark green, with brown and yellow accents, they have rounded shells, stubby hind legs and flat front limbs built for digging. They occur in western Arizona, southern Nevada, Southern California and southwestern Utah. Kusumi said genetics could also offer clues as to how the species can live in such a diverse range of environments.

“If you moved one from, say, Las Vegas to Southern California, it probably wouldn’t do very well, because that’s not the environment that its genome is making it suited for, » he said. « So, within that species, we’d love to know the genetic instructions that make a tortoise better suited for one place versus another.”

Posted On 3 avril 2017
The Ministry of Municipality and Environment (MME) recorded the first nesting of the season by the critically endangered Hawksbill turtle at Fuwairait Beach on Saturday.…

Posted On 19 février 2017
Dry Tortugas is a chain of small islands about 113 kilometers (70 miles) west of Key West, Florida, in the Gulf of Mexico. To get there,…