They rescue ailing seals — plus dolphins, turtles and whales — along Jersey’s shores

A look at the Marine Mammal Stranding Center, where the stories are fascinating and the concern over offshore oil drilling runs deep.

BRIGANTINE — The woman on the other end of the phone was a mom from Spring Lake. She posed a simple question — one that set off alarm bells at Marine Mammal Stranding Center.

What do seals eat?

“She picked one up off the beach, took it home and put it in her bathtub for her five kids to play with,” said Bob Schoelkopf, the nonprofit center’s founding director. “These are wild animals and they have teeth. Nobody should touch them.”

Bob Schoelkopf, founding director of the Marine Mammal Stranding Center, with a seal rescued from Sea Bright. (Photo: Jerry Carino)
If a seal ends up on a Garden State beach, which happens quite often in winter, chances are Schoelkopf knows about it. Marine Mammal Stranding Center has treated more than 5,000 animals — including seals, turtles, dolphins and whales — over the past four decades. They might be sick, injured or stranded by circumstances. Sometimes, as with the Spring Lake mom, they have to be rescued from human interaction.

She has a huge stray-cat colony in her Tinton Falls backyard; they have a solution

“Yesterday a woman tried to feed fish to a seal in Deal,” Schoelkopf said Saturday as he gave me a tour of the center. “People think, ‘Oh, I’ll help the seal out.’ Because of that, we had to go up there and relocate the seal.”

This is an impressive operation. In 2017, Schoelkopf and his team dealt with 65 seals, 56 turtles, 27 dolphins, 12 porpoises and seven whales. Of the seals, only eight died at the center.

This seal, rescued in Seaside Park, has lungworms — a parasite that makes it difficult to eat. (Photo: Jerry Carino)
February to April is his busiest stretch as baby seals start drifting in from northern waters. And things will get busier, perhaps catastrophically so, if oil drilling comes to the Jersey coast. Schoelkopf has been saving marine mammals for four decades, since bombs busted his eardrums in Vietnam. Now his job might be more important than ever.

Schoelkopf was a Navy corpsman in Vietnam. Intense shelling during the Tet Offensive cost him 50 percent of his hearing in both ears. After getting Medevaced home he took up work at a nearby aquarium. The captivity scene didn’t sit well with him, so he founded Marine Mammal Stranding Center in Brigantine.

With Bob’s wife Sheila taking the lead, MMSC raises $650,000 in donations each year to fuel operations. A fascinating museum on the site also garners revenue. The total income is enough to maintain a four-person staff and accommodations for 25 animals. 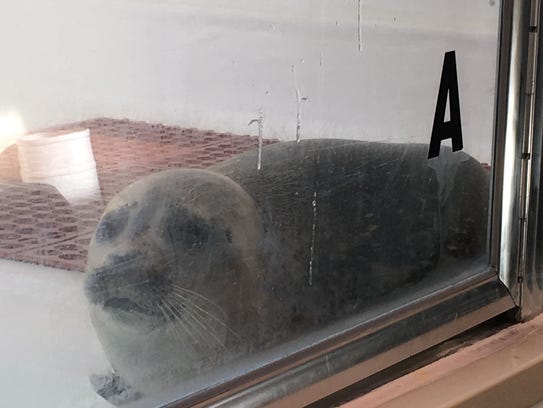 Right now there are three ailing seals on the premises: one from Seaside Heights, one from Sea Bright and one from Seaside Park (see them in action in the video atop this story). The first two have respiratory problems; the third has a parasite. Like most of seals that wind up here, they’re young and disoriented. After a few weeks’ care, they should be ready to return to he ocean.

“They come in not knowing how to eat in many cases,” Schoelkopf said. “We have to teach them what food is and how to swallow it. That keeps us hopping.”

He’s got stories. Like the time, in 1994, that a right whale turned got stranded in the Delaware River near Philadelphia. Schoelkopf used his military contacts to get crucial help from Navy SEAL personnel. A thank-you letter from the SEAL commander still hangs in his office.

Bob Schoelkopf, founding director of the Marine Mammal Stranding Center, with a seal rescued from Sea Bright. (Photo: Jerry Carino)
Last summer, a dolphin got caught up a creek in Cape May during low tide. The center’s crew carried it to the freedom of Delaware Bay.

Two years ago, they rescued a seal with a fish hook embedded in its mouth at Island Beach State Park. They saved another whose flipper nearly got sawed off by a boat propeller.

Schoelkopf’s biggest advice to wintertime beachgoers: Do not approach seals.

“Some people think they don’t belong on land, but they do; that’s where they rest and sleep,” he said. “About five years ago, one woman saw a baby gray seal, grabbed it by the flippers and tried to pull it into the water. She got bit.” 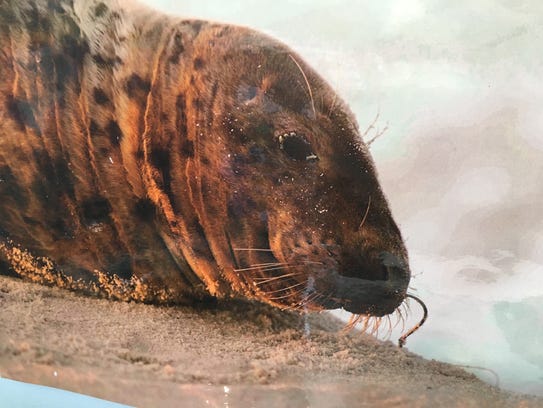 This seal, found two years ago at Island Beach State Park with a fishing hook stuck in its mouth, is now in an aquarium in Ohio. It had become too friendly with people to return to the wild. (Photo: Jerry Carino)
A seal bite is nasty.

“I’ve been bit maybe seven times in 40 years,” Schoelkopf said. “The infection sets in within 24 hours, and I mean bad. I’ve had red lines up my arms. Once my whole hand looked like a boxing glove.”

He can tell by a photograph is a seal is distressed. Right now, he said, there are three healthy ones hanging out in the Shark River next to Belmar. Jersey is teaming with marine wildlife. It keeps Schoelkopf and his crew busy — but could soon overwhelm them.

Schoelkopf was on the front line when outbreaks of the disease morbillivirus killed untold numbers of dolphins in 1987 and 2013. Now he fears something that could damage the species even more: offshore oil drilling.

The federal government is pushing for such drilling along the East Coast. Oil companies search for optimal ground through “seismic testing,” shock waves that could decimate the dolphin population.

“In the summertime you can see 40 to 60 dolphins at a time swimming along the beach, feeding,” Schoelkopf said. “With seismic testing, they’re going to trap those animals against the coast. There’s no place else for them to go.” 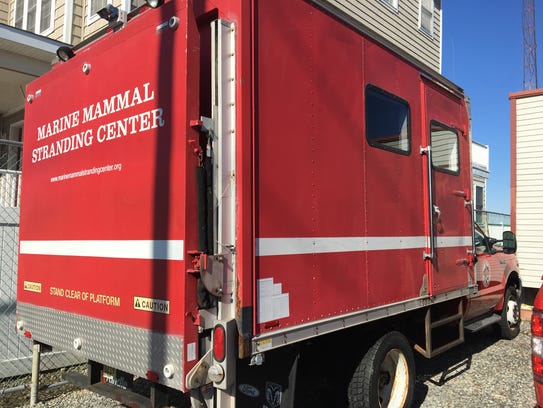 The Marine Mammal Stranding Center’s ambulance. It can transport eight seals at a time or an animal as big as a dolphin. Funds are being raised for a new one. (Photo: Jerry Carino)
Schoelkopf foresees his caseload tripling or worse. And that’s not even considering the potential damage caused by oil spills.

“We have no idea what we’re going to do with all the animals that may come up on the beaches,” he said.

New Jerseyans would be outraged at the sight, but by then, it might be too late. 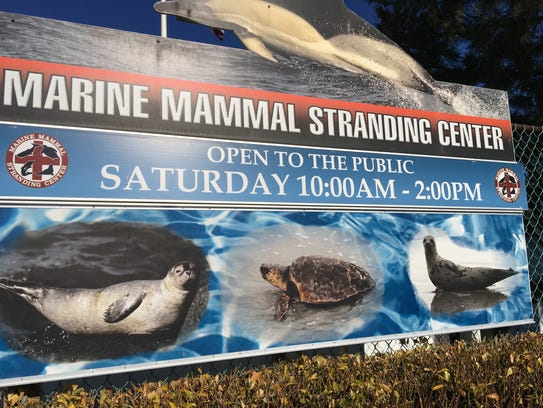 Sign in front of the Marine Mammal Stranding Center in Brigantine. (Photo: Jerry Carino)
“You can’t wait until the oil rigs are in place,” Schoelkopf said. “Once the government signs off on it, those companies are not going to back out because the public says we don’t like it. Now is the time to contact your lawmaker and say, ‘Stop this.’”

On MMSC’s grounds sits the skull of a baby Humpback whale that washed up at Island Beach State Park in 1991. It bears cuts from a ship propeller — a sign of our ecosystem’s delicate balance, and a reminder that in the rescue business, you never know what call is coming in next. 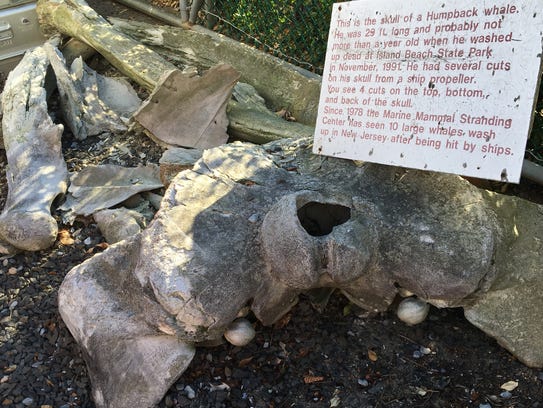 The skull of a young Humpback whale found dead at Island Beach State Park in 1991. Visible are several cuts from a ship propeller. (Photo: Jerry Carino)
Marine Mammal Stranding Center is raising money for a new truck to transport seals and dolphins. For more information on MMSC, or to donate, visit www.mmsc.org.

Spend 10-minutes watching incredible encounters with other marine life at the Jersey Shore in the video below.

Whale watching along New Jersey’s coast is nothing short of magical. The best chance to see these majestic mammals and other Jersey giants of the sea is during spring and fall. Take a 10-minute break and dive into this amazing world. Ryan Ross | Dan Radel | Brian Johnston | Tanya Breen | Joe Lamberti

Ancient Crocodiles Once Feasted on Giant Tortoises on This Island

Posted On 24 janvier 2018
Trilobites By NICHOLAS ST. FLEUR JAN. 23, 2018 Today, Aldabra Atoll, an island in the Indian Ocean near Madagascar and Tanzania, is a predator-free paradise for more…

The proof’s in the poop

Posted On 28 décembre 2014
Chico State grad student crowdfunds research in the emerging science of environmental DNA By Ken Smith  kens@newsreview.com This article was published on 12.25.14. Lawson in the lab…