Tiny turtles shut down JFK runway when 40 wandered onto tarmac

Flights at a US airport were briefly delayed, but not by passengers of equipment malfunctions. It was turtles.

The Port Authority of New York and New Jersey says about 40 diamondback terrapins crawled out of Jamaica Bay and onto New York’s John F Kennedy Airport airfield on Friday evening.

Some planes « were briefly stuck in queue » while the turtles were being rounded up, Authority spokeswoman Cheryl Albiez told the Daily News. 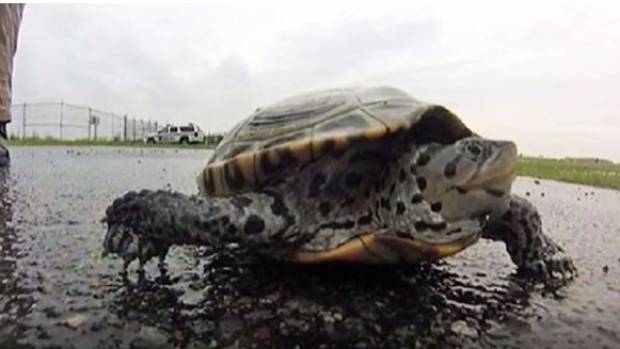 Last year, nearly 500 turtles were captured after wandering onto the airfield.

The turtles’ annual migration takes place from June to mid-July.

Port Authority wildlife specialists collect the animals that wander too close to the runway and release them to safer areas.

Currently stuck on the JFK tarmac for the only acceptable reason a pilot has ever announced. https://patch.com/new-york/queens/jfk-airport-runway-shut-down-pregnant-turtles-reports-say …

On Thursday, a Christchurch woman who sneaked a tiny red-eared slider turtle into New Zealand pleaded guilty to a charge of possessing unauthorised goods under the Biosecurity Act.

The turtle is listed as one of the world’s 100 worst invasive species.

The turtle had been given to 43-year-old Qiang Wei Luo’s 6-year-old son on a visit to family in China.

Luo knew it could not be brought into New Zealand, but she decided to bring it in when her son became upset.

The Ministry for Primary Industries told Judge Tony Couch that New Zealand was one of the few countries without an established wild population of red-eared slider turtles.

The species was readily-available in New Zealand through pet stores and over the internet.

Their impact was largely unknown, but they could affect aquatic plants, insects, small fish and ground nesting birds.

Posted On 13 septembre 2017
Solstice was found hypothermic and dehydrated on a beach in southwest Washington on December 21, 2014 - the winter solstice. She was likely not yet…

Posted On 27 mars 2015
Things are looking up for Cleopatra: The leopard tortoise now has a 3D-printed prosthesis to protect her deformed shell from further injury by other tortoises.…