No, not a mirage in Malta, but Spiaggia dei Conigli, Lampedusa. This is what nesting marine turtles look for – beaches ‘unpolluted’ with light, construction and loud music.

The recent nesting of a loggerhead turtle at Ramla tal-Mixquqa (Golden Bay) has, predictably, stirred much local interest in view of the charismatic nature of these iconic nomads of the sea.

Way back in 1960, the same beach was a far cry from the light-polluted, cacophonic and congested place it is today. That was the year when one of the last successful loggerhead turtle nestings on a local beach was observed.

Unfortunately conservation ethics in those days are not what they are today, and the hapless loggerhead in question was consumed, along with its eggs, by those observing its ordeal. Up to 25 or 30 years ago marine turtle flesh could easily be purchased in markets for use in soups.

Loggerhead turtles reach maturity between the ages of 10 and 30. Different turtle species may lay between 25 and 200 eggs on a single beach and they take about two months to hatch. The heat of the sun incubates the eggs and determines the sex ratio of the offspring – if temperatures rise above 29.9°C the embryos become female; lower temperatures result in male hatchlings. The eggs usually hatch at night.

Although marine turtles breathe air, they can spend up to three hours submerged under water. Most turtles are mainly opportunistic carnivores, feeding on fish, jellyfish, tunicates (ascidians, sea squirts), sponges (they are one of a few animals that eat them), soft corals, crabs and squid.

Recent research suggests that loggerhead turtles reach a milestone in middle age when they change from feeding on pelagic prey in open waters to feeding on benthic prey in more coastal waters.

The loggerhead turtle breeding grounds closest to Malta are Spiaggia dei Conigli (Rabbit Beach) in Lampedusa and the shores of Tunisia and Libya. But the largest populations of loggerhead turtle in the Mediterranean are found in the eastern Mediterranean, with beaches in Greece, such as Zakynthos Beach, Kazanli Beach in Turkey and Akamas Beach in Cyprus hosting the largest numbers of nesting turtles. The loggerhead species has even been reported nesting in Egypt’s Nile delta.

Will the thumping music and revelry that accompanies the frequent parties for youngsters held at Golden Bay be restrained as a result of the nesting?

The Sicily Channel area is recognised as a critical habitat area for the most common marine turtle species in the Mediterranean – the loggerhead turtle – with at least one long-standing nesting beach at Spiaggia dei Conigli and with the species occasional nesting along extensive parts of the south Sicily coast, such as beaches in the communes of Gela, Noto, Capo Passero and Sciacca, and on Linosa.

The loggerhead turtle is almost a mainstay at Spiaggia dei Conigli, with a number of nests being established on the beach each year. This can be attributed to the strict conservation regime in force on the beach and its nearshore waters, which form part of an effective Marine Protected Area.

A group of loggerhead hatchlings scrambling towards the sea at the long-standing nesting site of Spiaggia dei Conigli.

For example, not a single kiosk is allowed to be set up on the beach (bathers basically have to lumber down the tortuous path to the beach with all their belongings), the number of boats allowed in the bay is regulated during turtle nesting time and light pollution is practically non-existent.

This is in stark comparison to the situation on beaches in Malta, which are loud, polluted, overcrowded, over-lit and constantly used by all types of sea vessels. All this makes me cynical when I see people’s euphoria that loggerheads may be returning to their roots on our beaches. For instance, will the thumping music and revelry that accompanies the frequent parties for youngsters held at Golden Bay be restrained as a result of the nesting?

The geographical area also seems to be an important migratory corridor for this species, with younger turtles migrating freely between the western and eastern basins of the Mediterranean through the Strait of Messina and the Sicily Channel. This has also been confirmed through genetic studies which indicate that loggerhead turtles found in the Sicily Channel mainly originate from Turkish waters and from other Mediterranean breeding areas.

Intriguingly, despite Malta’s close proximity to Lampedusa, there seems to be very little admixture between turtles originating from this island, which lies about 110 kilometres southwest of Malta, with those found in Maltese waters.

In a project led by Stazione Zoologica Anton Dohrn in Naples, tags attached to a number of loggerhead turtles that were released following rehabilitation have revealed that some turtles swim very long distances. For instance, one individual, nicknamed Vicky, reached the Sardinian coast 54 days after its release, and eventually reached Spain, before heading down to the Algerian coast shortly after, a journey of more than 3,000km covered in the space of only a few months. 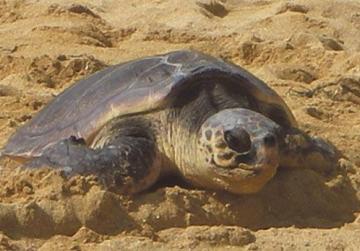 Nature Trust and the Department of Fisheries have been rehabilitating loggerhead turtles accidentally caught by fishermen for years now, releasing them in separate contingents once rehabilation is over.

Marine turtles’ curved carapace length (CCL) is used to indicate when they reach adulthood. The maximum CCL reached by male and female loggerhead turtles are 70 to 80cm and 66.5-84.7cm respectively, with individual turtles taking anywhere between 16 and 28 years to reach such dimensions.

Interestingly, Mediterranean adult loggerhead turtles are significantly smaller than their non-Mediterranean counterparts, with researchers attributing this to slower growth rates, earlier sexual maturity or a mix of both. The loggerhead turtles caught, stranded or seen in Maltese waters have mostly been juveniles or young adults.

The World Conservation Union (IUCN) has compiled a long list of threats to the loggerhead turtle population in the Mediterranean, including coastal overdevelopment/urbanisation, disturbance (boat collisions, light pollution), beach erosion and engineering, beach litter and non-intentional taking/killing. This is sobering indeed, especially when one considers that more than half of the total Mediterranean coastline is already under concrete.

Severe exploitation of loggerhead turtles and their eggs took place in the Mediterranean between the 1920s and 1970s, especially in the coastal areas of Israel, Palestine and Turkey, from where harvested turtles were traditionally sold to the UK and Egypt. But thanks to the introduction of conservation legislation to safeguard marine turtles the intentional killing of loggerhead turtles persists only along parts of the Egyptian coast.

The Mediterranean is currently estimated to host over 7,000 nesting sites for the loggerhead turtle, way below the amount that the species enjoyed previously.

Marine turtles are dogged by a major Achilles’ heel – the need to lay their eggs on land on ever more rare pockets of undisturbed sandy coastline. The projected rise in the level of the sea due to global warming could further erode their remaining beach havens.

How much did he shell out on that ? Father-of-two, 42, spends four months building a Crystal Maze-style hutch the size of a garage in his garden for his pet tortoises

Posted On 18 septembre 2017
Paul Gordon, 42, spent 10 hours every day learning carpentry and laying concrete by hand to construct the habitat for his pets George and…

Posted On 23 avril 2020
Vulnerable leatherback sea turtles are flourishing on a South Florida beach amid the coronavirus lockdown. In an April 18 Facebook post, the Loggerhead Marinelife Center said that its staff…