Conservation efforts are proving successful for a group of endangered turtles.

BELLINGER RIVER SNAPPING turtles have been seen mating in their new home at Sydney’s Taronga Zoo, giving hope to researchers working to save the critically endangered species.

“There are very few mature turtles remaining in the wild, so this group at Taronga has a vital role to play in rebuilding the population,” said keeper Adam Skidmore.

Taronga vets will conduct ultrasounds on the turtles later this month to see if the females are carrying eggs.

“We’re optimistic that we can establish a successful breeding group here to ultimately raise and release hatchlings back into the Bellinger River,” said Adam. 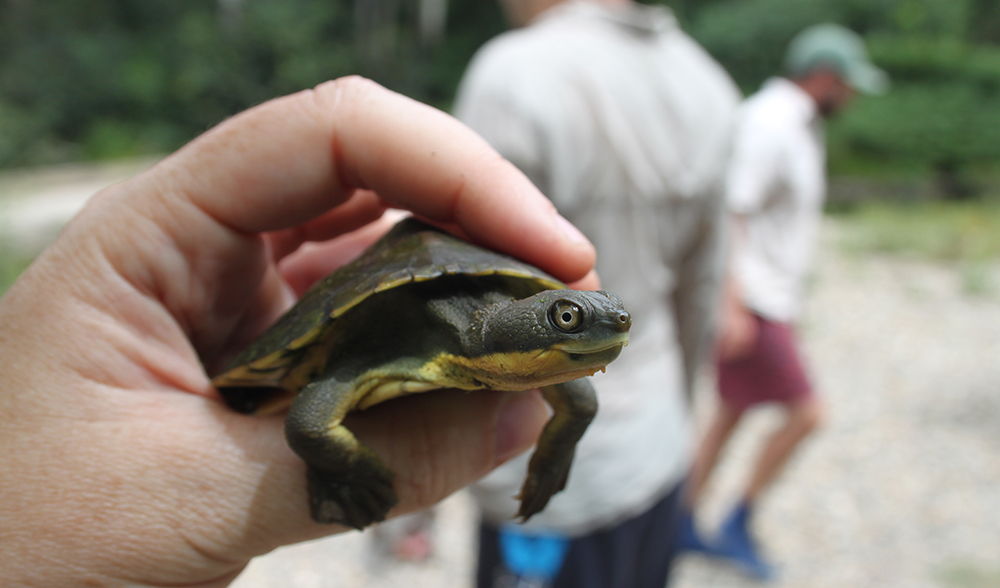 A group of Bellinger River snapping turtles turtles was relocated to Taronga Zoo in a bid to save the species, which was being wiped out by a mysterious disease. (Image: Paul Fahy)

The rare Bellinger River snapping turtle lives along the Bellinger River catchment system on the mid north coast of NSW. Last year there were still around 4000 turtles in the wild until a mysterious disease, which caused severe organ damage and blindness, wiped out almost 90 per cent of the population.

The group of 16 turtles was relocated to Taronga in April as part of a breeding program aimed at saving the species after hundreds were found washed up on the banks of the river.

The emergency rescue operation initiated by Taronga and the NSW Office of Environment and Heritage involved placing survivors in quarantine at Western Sydney University before moving them to Taronga where they were screened for the disease on multiple occasions – luckily the results came back negative.

“It’s clear the turtles had not been exposed to this particular pathogen before… it had to be something entirely new to the species,” said Dr Karrie Rose, leading researcher from the Australian Registry of Wildlife Health.

“This species is completely conservation dependant. There could be as few as 200 individuals remaining in the wild, so they really need our help,” she said.

Other researchers are continuing their investigation into the mysterious disease to better understand its mysterious nature and cause.

While the disease has not reappeared since last year’s outbreak, researchers continue to monitor the remaining turtles and other wildlife in the Bellinger River catchment system.

Blanding’s turtles get a boost in DuPage

Posted On 24 mai 2017
« »  A nearly 2-year-old Blanding's turtle waits for release in DuPage County on Tuesday. The turtles were raised in captivity to give them a…