The olive ridleys, each shorter than a credit card, are among five species of sea turtles in the Philippines that are in danger of extinction, mostly because they are prized as a protein-rich food.

« Not too long ago, all marine turtle eggs here ended up in the pot, » said Manolo Ibias, 63, a part-time fisherman and farmer who in his youth stole ridley eggs buried along the coast to eat as omelettes.

As a late convert to conservation, Ibias has for the past 17 years led Pawikan Conservation Centre, a community-based effort to protect turtles in Morong, a town about 80 kilometres (50 miles) west of Manila, which is the olive ridleys’ largest known egg-laying site in the country.

Globally, all seven known marine turtle species are declining or near extinction, mostly because of human actions, according to the Swiss-based International Union for the Conservation of Nature.

These include accidental capture by giant nets of industrial-scale fishing trawlers, as well as coastal development that rob the migratory reptiles of nesting sites. 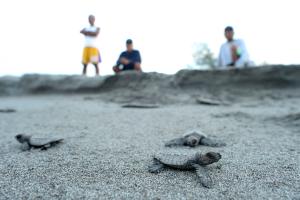 And while the sea turtle trade is banned under an international convention, their meat and eggs remain a source of food and income for many people, such as those in the mostly poor fishing villages near Morong.

They are also harvested around the world for medicine, religious ceremonies and as articles of fashion.

Viloria said these efforts, focused mainly on educating communities but with little funding, were aimed at protecting about 100 major nesting sites, including at Morong. 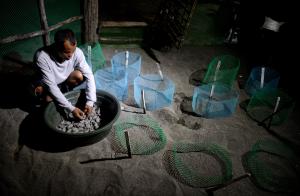 A law was also passed in 2001 punishing the trafficking of turtles and other endangered species with stiff jail terms and fines.

« Our goal is to reach a stable population, when they will no longer be endangered, » she said.

However turtle numbers are likely still in decline, according to Romeo Trono, who previously ran the government’s sea turtle conservation programme and is a respected global expert on the animal.

While some local communities have been educated, Chinese traders have emerged as the greatest threat, bringing boats close to Philippine islands and filling them with turtles bought from local poachers, Trono said.

In China, turtles have for centuries been prized for their medicinal value and as a food, and rising incomes in the world’s most populous nation have fuelled demand. 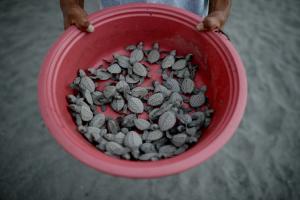 Eleven Chinese fishermen wee arrested for poaching more than 500 marine turtles last year and are on trial on the western Philippine island of Palawan.

But Viloria conceded Chinese-orchestrated poaching remains a major problem in the Philippines, a nation of more than 7,000 islands with a small and poorly funded coast guard.

« Our waters are too vast. We cannot effectively conduct patrols, » Viloria said.

Morong’s Pawikan centre, named after the Filipino term for the animal, is promoted as a showcase for the national efforts to protect the species. 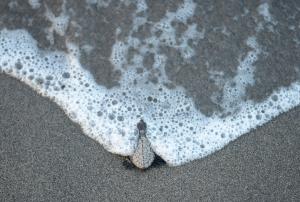 But it also illustrates the many challenges.

To protect them from poachers, the centre’s 17 volunteers, mostly local fishermen and farmers, dig the eggs up and bury them at a guarded artificial hatchery nearby.

They also take turns patrolling the seven-kilometre (four-mile) stretch of South China Sea coastline in an all-terrain buggy in a bid to stop residents of nearby villages from stealing them.

Natural predation from birds and fish, as well as human activity, mean just one percent of hatchlings typically survive into adulthood, according to conservation groups.

At Morong, the odds are even worse.

Relocating the eggs initially to the artificial hatchery cuts their survival chances because they are taken away from their natural habitat, according to Ibias.

And with no national government financial support, the centre relies almost entirely on tourists for funding — which has some potentially deadly consequences.

As a survival instinct to avoid predators, the hatchlings always emerge from their shells at night and aim to get straight to the water.

However, to cater for the tourists, the hatchlings are prevented from immediately running from the sand to the ocean, sometimes being made to wait hours in a big bucket until tourists turn up in the morning.

For 50 pesos (about $1), visitors can pick one up, take a photo with it, then release it into the ocean. But preventing the hatchlings from immediately crawling to the water exhausts them, Trono explained.

Ibias also warned conservation efforts could eventually fail, with impoverished villagers often feeling they have no choice but to eat turtle eggs.

He said: « Until we alleviate the problem (of poverty), getting rid of the poachers will remain next to impossible. »

Officials to keep watch over stranding of turtles on Cape

Posted On 11 juillet 2018
There could be shell to pay for a Philadelphia man facing federal charges for allegedly trafficking thousands of turtles. A federal grand jury indicted David…