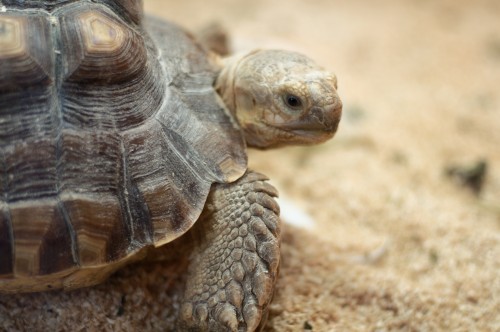 In addition to jail time, Cheung was ordered to pay a $12,000 fine and perform 500 hours of community service at an animal shelter. He will also serve two months in a residential re-entry center (a “halfway house”) during the supervised release.

Cheung brought three boxes labeled as toys — which actually contained the tortoises — to a United States Postal Service facility in San Gabriel, California, for shipment to Hong Kong. The Postal Service refused to ship the boxes because the fake name and address used by Cheung was suspicious. When Cheung could not be located, the undelivered packages were processed for shipment to a “dead mail” facility in Georgia. Sadly, not all of the tortoises survived the horrific ordeal.

Subsequent investigation by the U.S. Fish and Wildlife Service and the United States Postal Inspection Service linked the fake name to Cheung. He pleaded guilty to one count of mislabeling wildlife intended for foreign commerce and was ordered to begin serving his sentence in February 2015.

Posted On 11 mars 2016
SIX endangered sea turtles, including two critically endangered Hawksbill Turtles, were released back into the ocean this week after they were rehabilitated at Dolphin Marine…

As turtles go, so go their ecosystems

Posted On 25 septembre 2018
by Mongabay.com on 19 September 2018 Turtles are among the most threatened of the major groups of vertebrates in the world, a new review paper says, perhaps…