Watch out for turtles crossing roads on rainy autumn days

Driving through the rain this morning, I spotted a moving blob on the glistening paved road ahead. Squinting through my rain-streaked windshield, I initially feared it was an injured animal. But as I approached, I was excited to see that it was an unharmed snapping turtle walking ever so slowly across the road. 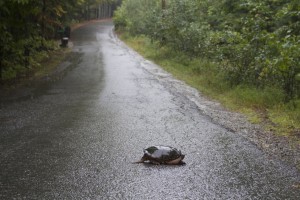 “As a general rule, most of Maine’s reptiles and amphibians are more mobile, active and more likely to be crossing roads during a big rain event — and that’s true any time of year, but especially in the spring and in the fall,” state biologist Phillip deMaynadier said when I called him this afternoon to discuss the turtle.

“In the spring, a lot of turtles are coming out of preferred hibernation areas and migrating to breeding areas,” deMaynadier said. “And then in the fall, this period we’re nearing right now, they’re moving from summer activity areas, where they spent most of the summer feeding, and they’re migrating towards where they plan to spend the winter.” 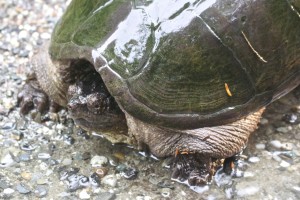 More-so than turtles, amphibians are dependent on water. Therefore, when it rains, people often see many frogs and salamanders moving over the land, and coincidentally, being run over on roads.

“After a long dry period like we’ve had this September, when you get a big pulse of rain like today, you’ll see a tremendous amount of amphibians making long overdue movements, taking advantage of the moisture,” deMaynadier said.

Maine is currently home to at least 39 species and subspecies of reptiles and amphibians. Of the seven turtle species that live in Maine (six native species and one exotic species), two species — the Blanding’s turtle and spotted turtle — are protected under Maine’s Endangered Species Act. (Click for a story about efforts to track and help these two endangered turtles in Maine.) And of Maine’s short list of turtle species, the northern snapping turtle and eastern painted turtle are the most common. 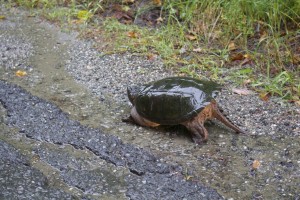 Upon seeing the snapping turtle in the road this morning, my first instinct was to put on my hazard lights and get out of the car to hurry the turtle along. But when I approached the turtle, it froze, tucked its head under its shell as much as possible and hunkered down on the pavement. That’s when I remembered my one and only previous experience with a snapping turtle…

Last July, I tried to help a snapping turtle cross a road in Winterport. (See blog post) When I approached the turtle to scare it off the road, it did the same thing. Instead of running away from me, as I expected it to, it turned toward me, tucked into its shell and made an intimidating hissing noise. Unwilling to touch the turtle — which is known for defending itself by snapping its sharp beak — I ended up scooping it up with a shovel and walking it across the road. 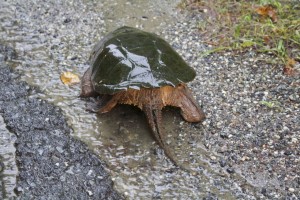 The turtle’s behavior made plenty of sense. All of a snapping turtle’s weapons — it’s sharp beak and large claws — are at its front. Therefore, it’s much smarter for a snapping turtle to face a potential predator than turn its back.

This morning, I didn’t have a shovel. So I simply got back into my car and waited. After just a couple minutes, the turtle poked its long head out of its shell, stretched its legs, lifted itself off the wet pavement and continued to cross the road, one slow step at a time. I waited until it moved off the pavement, across the gravel shoulder and into the grass, then continued to work.

“I’m going to be a little late,” I sent in a text message to my editor at the BDN. “I stopped to save a turtle.”

Posted On 5 septembre 2017
While most of us were sleeping on the night of Aug. 28, newly hatched hawksbill turtles emerged from their nest on a remote beach on…

Posted On 13 décembre 2013
Nagakute turns on rogue pond turtles CHUNICHI SHIMBUN The rampant rise of red-eared terrapins is posing an ecological threat in a park in Nagakute, Aichi…